On February 18th 2013 the BBC published an article in the Middle East section of its website entitled “Protest in West Bank for Palestinian hunger strikers“. 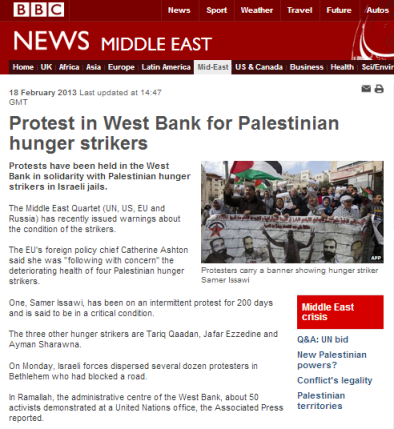 Like many other media organisations, the BBC made much of the numerous uninformed statements on the subject coming from abroad.

“The Middle East Quartet (UN, US, EU and Russia) has recently issued warnings about the condition of the strikers.

“On Saturday the EU called on Israel to “[fully respect] international human rights obligations towards all Palestinian detainees and prisoners”.

Earlier in the week, the UN expressed concern for the hunger strikers and called on Israel to end its practice of administrative detention.”

“Mukid Abu Atwan, the Director General of Palestinian Prisoners’ Ministry, told the BBC that the hunger strikers should be released immediately.

“We want to tell Israelis and the rest of the world that we won’t accept for Palestinian prisoners to come out of jail in coffins. They deserve to be free and live a dignified life,” he said.

The hunger strikers and their supporters say they are being unfairly held.”

What this BBC article fails to do, however, is to inform its readers of who the striking prisoners actually are and why they are in prison in the first place. The article states:

“One, Samer Issawi, has been on an intermittent protest for 200 days and is said to be in a critical condition.

The three other hunger strikers are Tariq Qaadan, Jafar Ezzedine and Ayman Sharawna.”

It is pointed out later in the article that Issawi and Sharawna were among the 1,027 Palestinian prisoners released as part of the Shalit deal in October 2011, but no information is given regarding the reasons for their imprisonment.

Our colleagues at CAMERA have more details on Samer Issawi:

“According to the Israel Prison Service, Samer Issawi of Issawiyeh, Jerusalem was arrested in April 2002 and sentenced to 26 years for attempted murder, belonging to an unrecognized (terror) organization, military training, and possession of weapons, arms and explosive materials.”

“It is important to point out the grave terrorism offences of which Al-Issawi was convicted, including firing a gun at a civilian vehicle in October 2001, indiscriminately firing an AK47 assault rifle at civilian buses, and manufacturing and distributing pipe bombs used in attacks on Israeli civilians.”

Issawi was rearrested in July 2012 due to violations of the terms of his release. Whilst the BBC includes in its article brief mentions of some of the various protests in support of Issawi, it notably refrains from mentioning the violent events initiated by Issawi’s family during a court hearing last December, the violent demonstration which took place three days before the article was published outside the Ofer prison or the involvement of the Democratic Front for the Liberation of Palestine (DFLP) in some of those demonstrations, as can be noted from observation of the flags bearing Issawi’s image below.

Ayman Sharawna, from Dura near Hebron, was also released under the Shalit deal in October 2011, by which time he had served ten years of a 38 year sentence for attempted murder and bomb-making. Sharawna is a member of the Hebron branch of Hamas and was rearrested on January 31st 2012 due to violating of the terms of his release by returning to Hamas activities. Shawarna was originally apprehended on May 10th 2002 when he and another terrorist planted an explosive device near a branch of Bank HaPoalim on HaAtzmaout Street in Be’er Sheva. The device malfunctioned, but despite that eighteen people were injured in the attack. Sharawna and his accomplice were caught fleeing the scene by members of the public and he was also found to have taken part in prior shooting attacks during the second Intifada.

Tariq Qaadan and Jafar Ezzedine are both from Arabe near Jenin and both are senior Palestinian Islamic Jihad operatives.

Qaadan has been arrested several times in the past, including in 2002 and 2004. In March 2011 Qaadan was arrested by the Palestinian Authority in connection with investigations into the terror attack in Jerusalem in which British national Mary Jean Gardner was killed and over 50 people injured.

Jafar Ezzedine has also been arrested in the past and took part in a previous hunger strike organized by Palestinian prisoners in May 2012. Earlier this month, Ezzedine took his case to the High Court of Justice, which rejected his appeal , clarifying that a hunger strike cannot be considered a factor in decisions relating to the length of administrative detention.

The BBC’s portrayal of Palestinian prisoners who have chosen to go on hunger strike as victims, and its failure to inform audiences of the true nature of their past crimes and their activities with terror organisations, does not only breach BBC guidelines on accuracy and impartiality.

The hunger strikes themselves – and the massive public relations campaign which surrounds them – are organised political acts designed to rally outside pressure on Israel with the aim of securing the release of people involved in terrorist activities. Neither the BBC nor the numerous foreign dignitaries expressing an opinion on the subject will, of course, have to live with the consequences of the success of that campaign. That task will be left to the Israeli public, some members of which have already fallen victim to acts perpetrated by these men.

It is highly inappropriate for the BBC to be lending its voice and its reputation to such a political public relations campaign by producing one-sided reports such as this one which hide the true issues from BBC audiences.