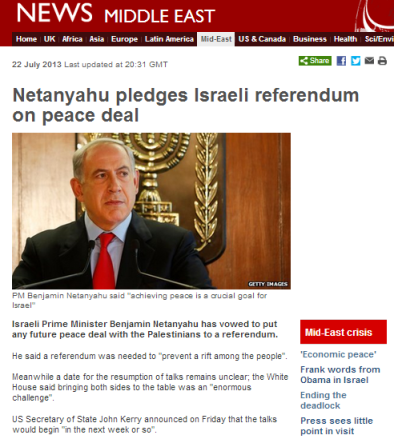 Right at the end of the article we yet again find the BBC misleading readers on the subject of the reasons for the discontinuation of previous talks in September 2010.

“The issue of settlement-building halted the last direct talks between Israel and the Palestinians in 2010.”

In fact, what actually “halted the last direct talks” was Mahmoud Abbas’ refusal to continue them when a ten month building freeze which he had ignored for 90% of its duration came to an end on September 26th 2010.

The BBC has promoted this misleading version of events to readers of its website incessantly over the past few weeks – see for example here and here.

In the article’s penultimate paragraph we find another distortion.

“The Palestinians have insisted Israel recognise pre-1967 ceasefire lines as borders of a Palestinian state, subject to some negotiation, before any talks commence, but this is something that has been opposed by right-wing members of Mr Netanyahu’s coalition.” [emphasis added]

The notion that a homogenous group called “the Palestinians” – or its representatives – is open to negotiation with regard to the 1949 Armistice Lines is patently false. Hamas (which received 44.45% of the votes in the last PLC elections) obviously rejects such a proposal, as do many others. In fact, the concept of land swaps – which is what the BBC is describing here – has only been officially accepted by the Fatah central council – which is just one of the factions making up the PLO which actually conducts negotiations – and even then under very limited terms.

“Although PLO chief negotiator Saeb Erekat initially said that this was not a new idea and that the proposal was presented in coordination with the Palestinians, some Fatah and PA officials have come out against the land swap plan.

Other Palestinians said the Arab League did not have a mandate to speak on behalf of Palestinians and offer territorial concessions to Israel.” […]

Unlike most Palestinian factions, Fatah said that today, it was not opposed to the land swap idea.

Fatah’s leaders stressed after their meeting, however, that they perceive the idea as meaning that there would be “minor and mutual adjustments” to the future border between Israel and a Palestinian state.

Accepting the idea does not mean “legitimizing settlement blocs” in the West Bank, they explained.

“Settlements in all the Palestinian lands are illegal. There can be no land swaps without an Israeli recognition of an independent and sovereign Palestinian state on the 1967 borders,” they said.”

Here we see the BBC patronizingly lumping of all Palestinians into one uniform group, and erasing the distinctions between Fatah, the PLO and the Palestinian Authority, as well as ignoring the fact that there are large sections of Palestinian society not represented by any of those bodies.

Clearly, the BBC is trying to present a much more accommodating picture of the Palestinian leadership than actually exists – and to contrast it with a picture of “right-wing” Israeli government intransigence in the second half of the above sentence.

This is not news reporting or current affairs analysis. It is the dumbed-down distortion of facts in order to promote a specific politically motivated narrative – i.e. propaganda – and that is not what the licence fee-financing public pays for.

7 comments on “The BBC’s fantasy version of peace talks”