You might think that an organisation which has as its motto the phrase “Nation shall speak peace unto Nation” would refrain from promoting the opinions of an antisemitic Holocaust denier, but that is not the case.

We have previously documented here examples of the BBC’s vigorous groupie-style promotion of Gilad Atzmon, especially on the World Service – see here, here and here – but on July 30th 2013 the BBC reached a new low by broadcasting an interview with Atzmon on its Persian Service. 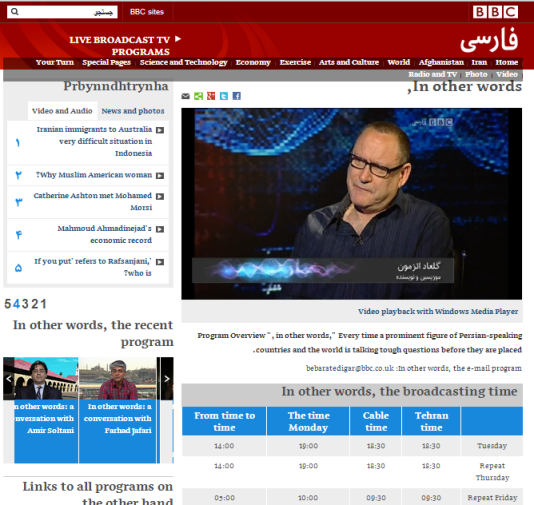 Atzmon is of course no stranger to the Iranian regime’s Press TV and yet for some reason best known to itself, the BBC – which prides itself upon being a source of “accuracy, impartiality, independence, seriousness” in parts of the world in which local media cannot be relied upon  to exhibit those qualities – apparently sees nothing problematic in promoting the vile opinions of a man securely in the pocket of the regime which so recently harassed its local employees and blocked its broadcasts.

It is bad enough that the BBC promotes Atzmon in English language broadcasts, especially given that anti-racists in Britain are trying to oppose the spread of his hate speech.  But it is even more reprehensible and irresponsible on the part of the BBC to go to the trouble of translating his racist opinions into Persian for promotion in a part of the world which has been spoon-fed with anti-Semitism and Holocaust denial for years by its own repressive regime.