Among the extensive coverage of last week’s release of 26 convicted terrorists which appeared on the BBC News website was an item titled “In pictures: Palestinian prisoners released” dating from August 14th.

The pictorial feature includes seven pictures – five of which show the released prisoners being received by family and crowds. None of the captions to those pictures make any mention whatsoever of the crimes they committed. In the pictures, the subjects are seen to be happy and smiling, sometimes making triumphal gestures, and with their faces well-lit. 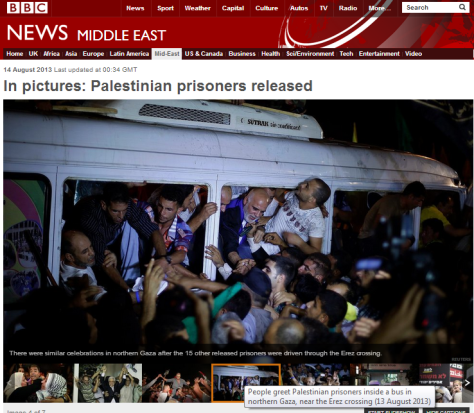 The last two images show the ‘Israeli side’ of the story. Picture number six shows Israeli police and prison service vehicles at the entrance to Ayalon prison. The only people in the photograph are uniformed officers whose faces cannot be seen.

The final picture shows Israelis – mostly male – protesting against the prisoner release. Notably, we do not see their faces except for one small child and a blurred side-view of a woman’s face half hidden behind a sign and so their protest – unlike the celebrations of the prisoners and their families – does not take on a human face with which audiences can connect.

Here are some examples of other pictures of Israelis protesting the prisoner release which were not selected for this ‘In Pictures’ feature.

3 comments on “BBC ‘In Pictures’ on prisoner release: no mention of crimes”