If listeners are interested in hearing a potted version of the BBC World View regarding the Iranian nuclear issue, the September 26th edition of the Today programme provides just such an opportunity. It also underscores two themes which the BBC appears to be doing its utmost to promote and amplify.

Starting at around 1:33:32 in this recording (available for a limited period of time) presenter John Humphrys introduces a segment of the broadcast which includes an interview with Israeli government spokesman Mark Regev with the following words.

“It was President Bush who coined the phrase ‘axis of evil’ – three countries whose activities threatened world peace – and Iran was one of the three. That was eleven years ago. A lot’s changed since then. At least that’s the hope at the United Nations today. For the first time there will be high-level meetings to find ways of Iran giving up its nuclear weapons programme in exchange for sanctions being dropped. The reason for this new hope is the more moderate approach of the new Iranian president Hassan Rouhani.” [emphasis added]

There is the first BBC promoted theme: audiences are not invited to make up their own minds as to whether a few strategically chosen words in interviews, speeches – and perhaps Tweets too – signal anything which can realistically be described as ‘moderation’. They are not even encouraged to ponder the question of what a “moderate approach” is in a regime which supports and enables regional dictators and terror organisations, which dictates the dress code of half its citizens and which discriminates against, imprisons and executes its own civilians for adhering to the ‘wrong’ religious or political views.

No – the BBC made up its mind that Rouhani is a ‘moderate’ practically before he had opened his mouth and BBC audiences are being kept firmly in line with that view, with no chance of reality being allowed to get in the way.

During the interview with Mark Regev – which was also featured on the BBC News website’s Middle East page – Humphrys promotes another BBC theme: that of equivalence between a repressive theocratic dictatorship and a working multi-cultural democracy. 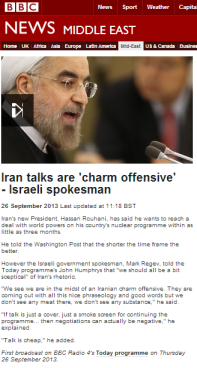 At 1:21 in that recording Humphrys says:

“They’re making very different noises now, aren’t they? And you…of course you’re entitled to say ‘oh, it’s just talk and they don’t mean it’, but give it a chance, can’t you? I mean isn’t that what the world wants you to do? What the world – at least a very large part of the world including the United States – wants Israel to do, which is to say yes; of course we are deeply suspicious of this regime, given some of its history. On the other hand,  we have treated Iran – that is to say the West, the United States, this country [Britain], has treated Iran in very dodgy ways indeed over the years – let’s now give it a chance to see if it can change its ways and if it does, the world will benefit hugely. A huge threat will have been lifted.”

Amazingly, the senior presenter of the BBC’s flagship current affairs programme appears to have completely failed to grasp that in the wake of the recent Syrian chemical weapons debacle, the West’s relevance in the Middle East in general – including what it wants Israel to do or not to do – has been diminished by the performance of the very countries he cites – the US and the UK.

“But surely it’s counter…it…it…it’s damaging to the whole process if, as your prime minister did, you instruct your delegation to boycott the speech…to boycott the Iranian president’s speech. Your own finance minister Mr Lapid said that instruction was a mistake. Israel, he said, should not seem as if it is serially opposed to negotiations, and is a country that is uninterested in peaceful solutions. That’s the danger for you, isn’t it? That’s how you paint yourselves.”

Humphrys’ focus on chiding the Israeli spokesman for his government’s refusal to have its UN delegation sit through Rouhani’s speech means that BBC audiences learn nothing with regard to the pro-forma anti-Israel rhetoric in the speech itself, Rouhani’s assorted Holocaust questioning and diminishing interviews with the Western media or the fact that just days before his UN appearance, Rouhani presided at a military rally (unreported by the BBC) in Tehran complete with calls for Israel’s destruction.

“Iranian President Hassan Rohani took part in an event in which there were calls for the destruction of Israel just days before the United Nations General Assembly.

On Sunday, a few days before he left for the UN meeting in New York, Rohani participated in a military parade in Tehran. Trucks carrying long-range missiles passed in front of him, alongside signs calling for the destruction of Israel.

A picture of the event, published on an Iranian website and by the French AFP news agency, show trucks bearing Shihab 3 missiles, which have the range to strike Israel. A sign in Persian hanging on one truck reads, “Israel must stop existing.” “

The subject of how Iran ‘paints itself’ is obviously not an issue for the cultural relativists of the ‘Today’ programme, but nevertheless, BBC audiences have the right to expect to be informed of the entire picture – not just the themes the BBC is keen to promote.

Does the evidence support the BBC’s touting of “less hardline Iranian stance” on nuclear issue?

Inaccuracy corrected in one BBC Rouhani article, left standing in another