The attempted hijacking of El Al flight 219 from Amsterdam to New York by Leila Khaled and Nicaraguan Patrick Arguello of the PFLP on September 6th 1970 lasted some three minutes and twenty seconds according to a reconstruction later carried out by the Israel Security Agency.

On October 21st 2013 BBC Radio 4 gave Leila Khaled a platform lasting almost the same length of time from which to promote her unchallenged narrative of the event in a fifteen-minute programme titled “Hijack!” (available here or here on iPlayer) which forms part of Fergal Keane’s series “Terror Through Time”, previously discussed on these pages. 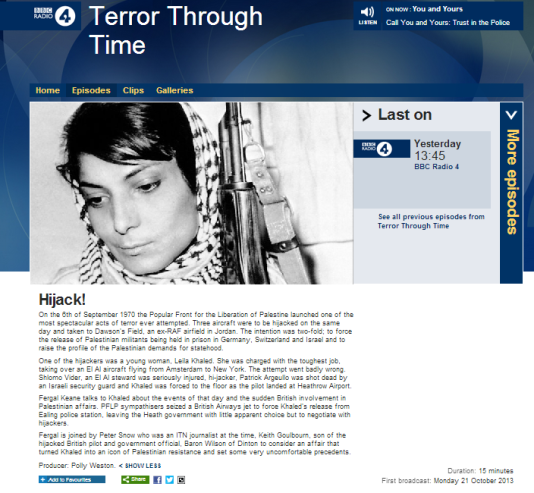 “Leila Khaled fled with her family from her birthplace of Haifa after the Israeli victory in the war of 1948. She was imbued with the determination to strike back against Israel.”

As is well documented, Khaled’s opprobrium would of course have been better directed against the Arab leaders who instructed their population to leave Haifa – even before the fighting had reached that area.

At 04:25 listeners can hear Khaled laughing about the stringent security measures now necessary on all flights as a result of terrorism. At 04:33 Keane says:

“But the operation already had problems. Two PFLP members had missed the flight, leaving just Khaled and Arguello to seize a jet that was protected by armed Israeli guards.”

In fact the other two members of the terror cell had not “missed the flight” but were prevented from boarding it by Israeli security. 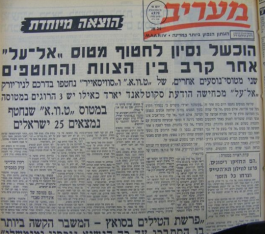 “After half an hour we stood up and I took the hand grenades and with my teeth I opened them. The minute we stood up and screamed, they began to shoot – all the security men from behind us.”

So listeners are led to believe that she and her accomplice were shot at immediately after having “stood up and screamed”.  According to the ISA reconstruction however, it was Arguello who fired the first shot, wounding flight attendant Shlomo Vider when the latter tried bare-handed to prevent him from approaching the cockpit. A female flight attendant managed to get to the back of the plane where one of the two air marshals on board (the other was in the cockpit at the time) was sitting – unaware at that point that a hijacking attempt was ongoing – and he then moved to the front of the aircraft where Khaled and Arguello were situated. The air marshal, together with the wounded, unarmed flight attendant, tried to overpower Arguello and the air marshal shot Arguello. The air marshal then overcame Khaled and, together with a passenger, managed to find the grenade’s pin and neutralize it.

Keane however allows Khaled to present an unchallenged version of events according to which she becomes the victim of an “attack”.

Towards the end of the item, Keane remarks that:

“In the space of a few weeks, a fascinated news media had cemented her [Khaled’s] position as an icon of terrorism”

Most licence fee-payers would probably find it highly regrettable that by providing a platform for the unchallenged propaganda of terrorists, the BBC continues to embellish that “icon”.