When the P5+1 signed the interim agreement with Iran on November 24th the BBC’s coverage of the event was – to put it mildly – very extensive. But as the details of the deal emerged in the following days and weeks and questions on all manner of related subjects began to be raised, the level of coverage declined notably.

An article titled “Iran nuclear deal: Key points” was produced on November 25th and several of the many other reports appearing on the BBC News website at the time included repetitions of those ‘key points’ as complied by the BBC – for example here, here and here. 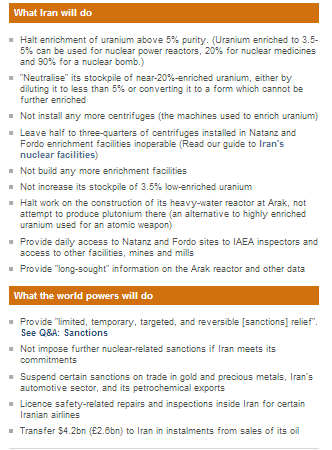 Reservations regarding the efficacy of the interim deal in general and specific aspects of it in particular have been voiced in a variety of quarters, but beyond a sometimes strident focus on Israeli objections to the terms of the deal (and to a lesser extent, those of Gulf States), the BBC has made little serious effort to inform its audiences of the existence of those reservations or to explain their basis.

One of the ‘key points’ presented by the BBC states that Iran will:

” “Neutralise” its stockpile of near-20%-enriched uranium, either by diluting it to less than 5% or converting it to a form which cannot be further enriched”

BBC audiences are not informed of the school of thought according to which conversion of 20% enriched uranium is not a one-way street which guarantees ‘neutralisation’.

“Do not be confused by the terms conversion and reconversion. I have heard it said: “Iran can convert the Fordo enriched uranium from UF6 to oxide but it cannot reconvert the oxide back to UF6.” Not true. The chemical processes corresponding to “conversion” and “reconversion” are more or less identical. Iran has lots of experience converting its uranium ore concentrates to UF6, and Iran can likewise convert U3O8 obtained from UF6 back into UF6.”

The BBC also states that Iran will:

“Not install any more centrifuges (the machines used to enrich uranium)”

However, the terms of the interim deal do not include the dismantling of any existing centrifuges and, as noted by the Wall Street Journal:

“Analysts agree that the hardest part of enrichment is the technology to reach a low level. From there, enriching it toward the 90% purity required in a nuclear weapon isn’t a major step. Uranium enriched to 5%—still allowed in Sunday’s pact—is almost three-quarters toward producing 90% weapons-grade material, says Mark Fitzpatrick, director of the nonproliferation and disarmament program of the Institute for International Strategic Studies in London.

Iran has more than 18,000 centrifuges, according to the International Atomic Energy of which the vast majority are older first-generation technology, so-called IR1s, whose speed and efficiency levels are low. Not all of them are operating. They also have installed—but not connected—around 1,000 second-generation centrifuges, or IR2s, said to be three to four times more efficient.

Even 3,000 of the old IR1s, run around the clock, could produce enough high-enriched uranium for a weapon in around three months, many experts believe. Were Iran to operate the same number of IR2 centrifuges, Iran could “break out” and produce enough material for a bomb in as little as four weeks. “

Another of the BBC’s ‘key points’ claims that Iran will:

“Halt work on the construction of its heavy-water reactor at Arak, not attempt to produce plutonium there (an alternative to highly enriched uranium used for an atomic weapon)”

The Iranian Foreign Minister has however since made it clear that some construction work will continue at Arak.

” “The capacity at the Arak site is not going to increase. It means no new nuclear fuel will be produced and no new installations will be installed, but construction will continue there,” Reuters quoted Zarif as saying.”

The BBC’s ‘key points’ also state that the world powers will:

The issue of the reversibility of sanctions is by no means as clear-cut as the BBC encourages readers to believe, with many holding the view that sanctions cannot be turned on and off at will. In addition, the actual value of the sanctions relief agreed under the terms of the interim deal now appears to be greater than first claimed.

Additional reservations raised with regard to the interim deal include its effect on non-proliferation in other countries and its acceptance – at least as clearly is understood by the Iranians – of a non-existent ‘right’ (erroneously promoted by the BBC in this article) to enrich uranium under the terms of the NPT.

“In a briefing with press shortly after the deal was announced, a senior US administration official emphasized that the US does not – and will not – recognize any Iranian right to enrich uranium.

A reported copy of the interim agreement, posted online by Iran’s Fars News, included recognition of the right to enrichment in a bullet list of goals for a final deal.

Araqchi, who served as lead Iranian negotiator in the talks, had emphasized earlier that Iran would not accept an agreement that did not recognize the right of the Islamic Republic to continue to enrichment uranium.”

Concerns have also been raised regarding the issue of the deal’s time frame and doubts have been expressed as to whether the interim deal will in fact lead to a permanent agreement.

One aspect of the agreement which the BBC has largely refrained from addressing is its potential influence on both Iranian domestic politics and on Iranian ambitions in the wider region as a whole, including the possible effects of freed-up Iranian assets being used to bolster Iranian proxies in the region.

As concerns have emerged and issues have arisen in the aftermath of the signing of the interim agreement, the BBC’s coverage has paradoxically waned and no effective attempts to keep BBC audiences informed of the background to those concerns have been produced. Instead, audiences are left with those dumbed-down ‘key points’ – a number of which were inadequately explained from the beginning – meaning that their “understanding of international issues” is once again severely compromised.

What have BBC audiences been told about the P5+1 deal with Iran?

3 comments on “Does BBC coverage of the P5+1 deal with Iran adequately promote audience understanding of the issue?”