With Radio 4 being one of the departments of the BBC which appears disturbingly frequently on these pages, we’ll file this one under 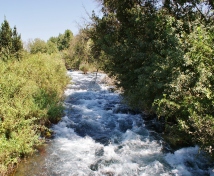 ‘credit where credit is due’.

The February 16th edition of the BBC Radio 4 programme Broadcasting House included an item by the BBC Jerusalem Bureau’s Kevin Connolly (available here from about 51:10) in which he travelled to Kibbutz Dan in the northern Galilee to report on its production of caviar – and managed to do so accurately and impartially.