It is not unusual to see Hollywood actors appearing on television shows as part of the promotion of their latest film and so the March 26th interview with Samuel L. Jackson and Scarlett Johansson on BBC One’s ‘Breakfast’ was unremarkable – until presenter Louise Minchin decided to re-route the hitherto light-hearted chat by throwing in some out-of-context global politics. 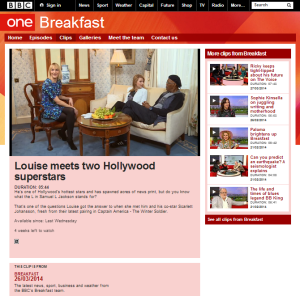 The interview can be viewed here for a limited period of time.

“And just on a serious note before we go on – and I know you’ve got to go – with regards to what happened with SodaStream; will it change your view on what you choose to do – the way you make choices – in the future?”

After the interview ended, audiences were informed by Minchin (not shown in the above clip) that SodaStream has a factory in a ‘Jewish settlement’ in the ‘occupied territories’.

In other words, the BBC’s amplification of the PR of the anti-peace BDS campaign continues – even with your cornflakes.

10 comments on “BBC One serves up BDS at Breakfast”