As has already been noted on these pages, the BBC’s coverage of the end of the latest round of negotiations between Israel and the PLO which reached their pre-set deadline on April 29th was left entirely in the hands of Middle East editor Jeremy Bowen. BBC audiences did not hear, read or see any alternative opinion or analysis to that provided by Bowen and vigorously promoted on a variety of BBC platforms.

The BBC Radio 4 programme ‘PM’ broadcast an audio item by Bowen in its April 29th edition which can be heard here. Presenter Eddie Mair stayed on message in his introduction to the item, promoting the superficial notion that Israel is to blame for the demise of the talks and – notably – with the unilateral actions taken by the PA such as applying to join UN agencies in breach of the agreement reached before the talks’ commencement or the Hamas-Fatah unity deal already having been erased from the BBC version of events.

“This morning, quietly, another deadline came and went in the Middle East. It should have been the deadline for the latest round of talks between Israel and the Palestinians. Before the discussions started last year, the US Secretary of state John Kerry said they might be the last chance for peace. But the deadline was missed because the talks were suspended last week by the Israeli Prime Minister Binyamin Netanyahu. He blamed the Palestinians. They blame him. President Obama blames both sides. If you’re wondering whether Palestinian – Israeli peace talks can ever succeed after years of failure, you’re not alone. So is our Middle East editor Jeremy Bowen, in Jerusalem. ” [emphasis added]

In this item, Bowen yet again reports from Hebron and once again fails to inform audiences that Israelis living there do so because the Palestinian Authority agreed to their presence in the H2 area of the city by signing the Hebron Protocol in 1997.

“I’m in Hebron which is the only city on the West Bank where Jewish settlers – Israelis – live in the heart of the town alongside Palestinians, but of course separated by wire, by concrete, by guns.”

Bowen also once again refrains from informing listeners why he needs to use the word “restarted” in the following sentence.

“I’ve come to see Shlomo Levinger who’s the son of one of the people who restarted Jewish settlement here in 1967.”

Bowen fails to inform listeners that security arrangements in Hebron – including those near the shared site of the Cave of the Patriarchs – are laid out in the mutually agreed Hebron Protocol, preferring to imply instead that freedom of worship for Muslims is impaired by Israeli security measures.

“Now I’m down near the building, the holy site here, which Muslims call the Abraham Mosque and which the Israelis – the Jews – call the Cave of the Patriarchs. And it’s a highly guarded place – there’s been a lot of trouble here in the past – and to get…for Palestinians who wanted to pray in the mosque…to get to the area and to get back they have to go through this turnstile past another Israeli checkpoint. More guns, more concrete.”

Bowen continues by interviewing an unidentified man in the street, whose opinions he apparently considers worthy of amplification, but providing no context – for example in relation to the subject of why exactly the “prisoners” the man mentions are imprisoned.

“Hebron; it’s a very unique place and you have the Israelis and the settlers very, very close to here. What is life like with the Israelis there and you here?”

Unidentified man: “Not good, no. [voiceover] There will never be peace – only in our dreams. The talks are unsuccessful. Israel is not serious. It’s a joke to them. They don’t want peace. They aren’t serious about it. They still have prisoners. They are still building settlements. It’s just words. They don’t mean it.”

Bowen then goes on to promote the NGO ‘Combatants for Peace’, describing the members he interviews only as ‘peace campaigners’.  That leads to Bowen’s conclusion, in which he promotes the notion of “the expansion of Jewish settlements” as being on a par with terrorism.

“The trouble is that conversations like that were also happening twenty years ago. They’re still in a minority and the pessimism caused by violence, the expansion of Jewish settlements and failed talks helps keep them there. Perhaps it’s too late to make peace by splitting the land between Israel and the Palestinians, but no alternative is easier and many look much worse.”

Bowen’s two interviewees from ‘Combatants for Peace’ also appeared in his written report which was published in the ‘Features & Analysis’ section of the BBC News website’s Middle East page on April 29th under the title “Have MidEast talks failure killed two-state goal?“. 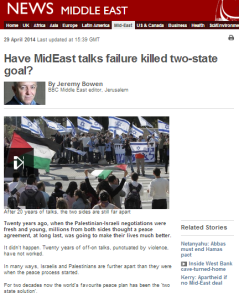 In that article Bowen repeats and promotes the same messaging points which dominated his other filmed and audio reports.

“Bowen’s messaging includes portrayal of the Arab-Israeli conflict as an exclusively Palestinian-Israeli affair and as one concerning land only, as well as the claim that the opportunity for a two-state solution to the conflict died with this latest round of negotiations (the end of which, significantly, had been attributed to Israel alone in previous BBC reports) and the prediction of  violence in the near future.”

As he did just days before in another report, Bowen once more ‘tidies up’ Palestinian terrorism against Israeli civilians in this one too, euphemistically turning it into unattributed and amorphous “violence”.

“Twenty years ago, when the Palestinian-Israeli negotiations were fresh and young, millions from both sides thought a peace agreement, at long last, was going to make their lives much better.

It didn’t happen. Twenty years of off-on talks, punctuated by violence, have not worked.” [emphasis added]

Bowen’s explanations to BBC audiences as to why the talks have failed are equally euphemistic and notably he continues the BBC policy, evident throughout the last nine months of coverage, of failing to clarify the crucial significance of the refusal of the Palestinian Authority (with Arab League backing) to recognize Israel as the Jewish state and thus an end to any future claims.

In addition to his themes of a conflict about land and the demise of the two-state solution, Bowen also revisits another theme he promoted only days previously – the ‘demographic threat’ argument, seasoned with the ‘apartheid’ trope. Under the sub-heading “Demographic time-bomb?” he writes:

“Secretary of State John Kerry has been forced to apologise, in effect, for remarks he made saying that Israel risked becoming an apartheid state if it cannot make a deal with the Palestinians.

The argument is that if Palestinians do not have their own state, they will have to be inside Israel.

If they were given the vote, their birth rate means they would soon be able to outvote Jews.

If they were not given the vote, Israel would be like the old South Africa.

Many Palestinians believe that their best strategy is to persuade the rest of the world that Israel should be isolated. They want it to be compared to apartheid South Africa.”

What Bowen fails to clarify to readers is that the argument he presents has nothing to do with population size and is null and void if – as is the case – Israel has not annexed the areas currently defined as Areas A, B and C. As James Kirchick recently pointed out:

“Let’s say, for the sake of argument, that the West Bank Arab population ballooned tomorrow from 2.5 million to 25 million, vastly exceeding the number of Jewish Israelis. By itself, this change in the proportion of Jews to Arabs would have no bearing whatsoever on whether Israel could be categorized as an “apartheid state,” because Israel has not annexed the occupied territories. […]

The Arab-Israeli conflict could persist for decades, frankly, with the Palestinian population in the territories growing at an exponential rate, and it would still not affect the question of whether Israel is or is not an “apartheid state.” The entire argument about looming apartheid is premised on the idea that if the peace process fails, Israel will ultimately annex the territories without granting the Arabs living there citizenship. […]

But if annexation comes to pass, it wouldn’t matter whether there are more Arabs than Jews in the new, enlarged Israel; it would only matter how Israel decided to treat its new Arab citizens.”

Bowen also refrains from explaining to BBC audiences why Palestinians “want it [Israel] to be compared to apartheid South Africa”, even though the comparison is utterly redundant. He fails to clarify that this is a tactic employed by Israel’s delegitimisers in an attempt to stigmatise the Jewish state as being morally beyond the pale and hence to bring about the demise of that country in its current form.

There is nothing new about the BBC’s consistent refusal to explain to its audiences the roots and political intentions of the ‘apartheid’ trope, but the fact that its Middle East editor – the man whose entire role is supposed to be to provide context to audiences – continues to intentionally avoid presenting that crucial background information on the one hand, whilst amplifying that trope on the other, raises serious doubts about his commitment to BBC editorial guidelines on impartiality and his ability to fulfil his stated role.

The BBC ME editor’s role: comparing theory and practice

What is the BBC’s take away message on end of Israel-PLO negotiations?