Late last August, when the US president’s ‘red lines’ on chemical weapons use by Bashar al Assad’s forces seemed to be about to lead to military intervention in Syria, the BBC News website produced a backgrounder titled “Syria crisis: Where key countries stand”.

As we noted here at the time, that article misrepresented Israel’s stance on the issue of military intervention in Syria, with the text of the original version reading as follows:

That text was subsequently amended, but inaccuracies remained: 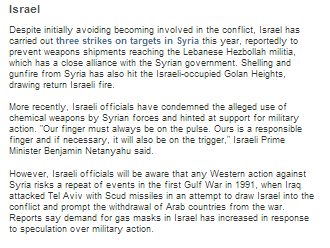 The original article also included a misleading map which presented Israel as one of the countries “for” intervention in Syria.

A complaint regarding that map was made by Mr Joe Davidoff in September 2013 on the grounds that it misrepresented Israel’s stance. The reply Mr Davidoff received from the BBC News website’s Middle East desk informed him that:

“We have reviewed the item in question and agree that the map did not accurately reflect the various countries’ positions on military intervention in Syria. We have now replaced the map with a photograph.”

And indeed, that erroneous map no longer appears in the article as it currently stands on the BBC News website, with the entry for Israel having been amended yet again to read as follows:

However, no footnote is appended to this article to clarify that an amendment has been made or that its previous versions “did not accurately reflect” Israel’s stance on the issue and the continuing lack of a dedicated corrections page on the BBC News website obviously means that audience members who read the original version of the report have no way of knowing that the information provided in it was misleading.

One must of course wonder how that original misleading portrayal of Israel’s stance on the topic of military intervention in Syria made it through the BBC editorial process in the first place, considering that only two weeks after the initial publication and following Mr Davidoff’s complaint, it was deemed inaccurate.