At around 01:00 local time on August 1st, the UN released a statement saying that a 72-hour humanitarian ceasefire effective from 08:00 local time had been agreed.

“Secretary-General Ban Ki-moon and United States Secretary of State John Kerry announce that the United Nations Representative in Jerusalem, Special Coordinator Robert Serry, has received assurances that all parties have agreed to an unconditional humanitarian ceasefire in Gaza,”

“This humanitarian ceasefire will commence at 8 am local time on Friday, August 1, 2014. It will last for a period of 72 hours unless extended. During this time the forces on the ground will remain in place.”

“We urge all parties to act with restraint until this humanitarian ceasefire begins, and to fully abide by their commitments during the ceasefire.”

The US Secretary of State further clarified that the IDF’s decommissioning of the cross-border attack tunnels would continue during the humanitarian ceasefire.

“Kerry, announcing the ceasefire deal in the early morning on a visit to India, said Israel and Hamas will “cease all offensive military activities and neither side will advance beyond its current locations.”

“Israel will be able to continue its defensive operations for those tunnels that are behind its lines, and the Palestinians will be able to receive food, medicine and additional humanitarian assistance as well as to be able to tend to their wounded,” the top US diplomat told reporters.”

Around an hour and a half after the humanitarian ceasefire came into effect, soldiers from the Givati brigade engaged in work to decommission one of those cross-border tunnels in the Rafah were attacked.

“IDF soldier Hadar Goldin, an officer in the Givati Brigade, was apparently abducted in the Rafah area of Gaza on Friday morning, in an attack perpetrated some 90 minutes after the onset of a truce. He was formally designated missing in action, an IDF spokesman said Friday. Two IDF soldiers were killed in the attack. […]

A suicide bomber and other gunmen engaged the IDF forces as they sought to decommission a tunnel. Shortly after the combined attack, it became clear to Israeli forces in the area that a soldier was missing.”

Israeli forces responded with fire to the Rafah area, with prevention of removal of the abducted soldier from the area of course being a priority.

So let’s now take a look at how the BBC has represented that timeline of events of the morning of August 1st to its audiences. Part one of this post deals with content published on the BBC News website and part two will look at presentation of the story to BBC television news viewers. 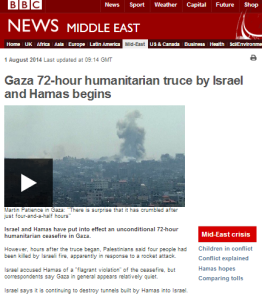 An article titled “Gaza 72-hour humanitarian truce by Israel and Hamas begins” published on the BBC News website on the morning of August 1st opens with some examples of the BBC’s practice of ‘last-first’ reporting.

“Israel and Hamas have put into effect an unconditional 72-hour humanitarian ceasefire in Gaza.

However, hours after the truce began, Palestinians said four people had been killed by Israeli fire, apparently in response to a rocket attack.

Israel accused Hamas of a “flagrant violation” of the ceasefire, but correspondents say Gaza in general appears relatively quiet.”

Further on the report states:

“During the morning life appeared to be returning to some kind of normality in Gaza, with many Palestinians heading towards heavily shelled areas to see if their homes were still intact.

But the Gaza health ministry reported that four Palestinians were killed and dozens were injured in an Israeli attack near the southern town of Rafah after the ceasefire began.

Israeli military sources told the BBC the attack was in response to rocket fire on Kerem Shalom in Israel.”

Later on the same day, that article was replaced by another titled “Israel to resume Gaza operation as truce with Hamas crumbles” which opens: 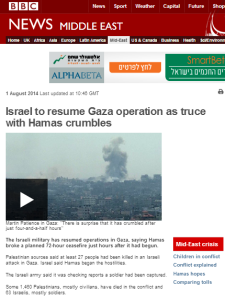 “The Israeli military has resumed operations in Gaza, saying Hamas broke a planned 72-hour ceasefire just hours after it had begun.

Palestinian sources said at least 27 people had been killed in an Israeli attack in Gaza. Israel said Hamas began the hostilities.”

The report includes the following ‘analysis’ from Martin Patience:

“The clashes in Rafah came just four hours into what was meant be a 72-hour ceasefire, reinforcing just how difficult it is to get truces to last beyond a very short time. Both sides will have expected such violations.”

“During the morning life appeared to be returning to some kind of normality in Gaza, with many Palestinians heading towards heavily shelled areas to see if their homes were still intact.

But the Gaza health ministry reported that at least 27 Palestinians were killed and 100 injured in an Israeli attack near the southern town of Rafah after the ceasefire began.”

Only in the fourteenth paragraph do readers learn anything of the real timeline of events, but they are still not properly informed of the connection between the fire on targets in Rafah – which is presented without any context in the earlier parts of the report – and the attack on Israeli soldiers in the Rafah area and the missile fire into Israel.

“Israeli foreign affairs spokesman Yigal Palmor told the BBC that Israeli forces had retaliated after being attacked in what seemed like a planned move by Hamas.

“There was a full-scale attack on an Israeli unit and this unit had to respond,” he said.

“After it responded, Hamas started firing rockets on Israeli territory again and therefore the fighting resumed all along the line.”

Also on August 1st the BBC News website opened a live page under the title “As it happened: Israel soldier ‘captured’“. There, readers were informed under the heading “Key Points” that: 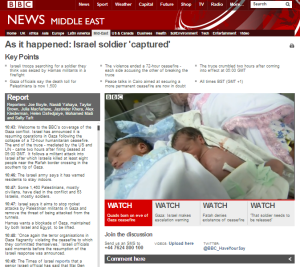 “The violence ended a 72-hour ceasefire – each side accusing the other of breaking the truce.”

The page’s ‘report’ section opens with the following confused and inaccurate account:

“The end of the truce – mediated by the US and UN – came two hours after firing ceased at 05:00 GMT. It follows a militant attack into Israel after which Israelis killed at least eight people near the Rafah border crossing in the southern tip of Gaza.” [emphasis added]

That section further confuses readers by promoting the following:

12:20: Kate Benyon-Tinker BBC News, Gaza: Hamas’s spokesman Fawzi Barhoum said: “The Israelis are the ones who breached the ceasefire, and the Palestinian resistance acted in a way that ensures its right of self-defence. The world is demanded to immediately interfere to stop the ongoing massacres against our people”.

12:33: BBC Monitoring BBC News : The Hamas-run Al-Aqsa TV in an urgent caption at 11:15 BST cites Hamas spokesman Sami Abu Zuhri saying Israel’s claim that one of its soldiers has been captured in Gaza is “an attempt to mislead and to justify its retreat from the calm and to cover monstrous massacres especially in Rafah”.

12:52: The Qassam Brigades, Hamas’ military wing, have released a statement blaming Israel for breaking the ceasefire. They said that Israeli forces had moved into eastern Rafah overnight and had been met with resistance by Palestinian fighters this morning. They also accused Israel of the random shelling of eastern Rafah.

13:01: Hamas: “We hold the Israeli occupation responsible for breaking the ceasefire and carrying out a massacre in Rafah”.

16:54: However, Fatah and Hamas both say it was the Israelis who broke the truce. Fatah spokesman Husam Zomlot told the BBC Israel continued its bombardment throughout the ceasefire period.

Later on August 1st another article appeared on the BBC News website under the inaccurate and misleading title “Gaza militants ‘seize Israeli soldier’ as ceasefire ends“. That report states: 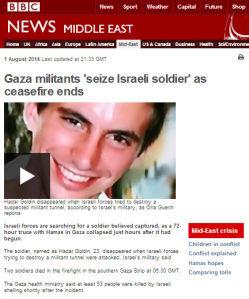 “Friday’s violence comes after a ceasefire brokered by the US and UN to give civilians a reprieve from the violence collapsed.

During the morning many Palestinians headed towards areas that had been heavily shelled areas to see if their homes were still intact.

But fighting then resumed, with Israel and Hamas accusing the other of breaking the ceasefire.”

“But Hamas spokesman Fawzi Barhoun [sic] said: “The Israelis are the ones who breached the ceasefire, and the Palestinian resistance acted in a way that ensures its right of self-defence.”

Another Hamas official said the announcement of the soldier’s capture was “a justification for Israel retreating from the truth and a cover-up for massacres”.”

On the morning of August 2nd a report titled “Gaza conflict: New exchanges amid Israeli soldier hunt” appeared on the BBC News website but provided no better clarification to audiences seeking to understand why the humanitarian ceasefire broke down. 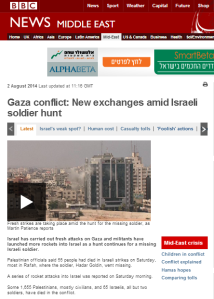 “A 72-hour ceasefire had been agreed, starting from Friday morning, but collapsed hours later.

Hamas accused Israel of breaking the ceasefire but the Israel Defense Forces (IDF) said it had been forced to respond to militant rocket fire.”

“Hamas accused Israel of breaking the short-lived ceasefire but the Israel Defense Forces (IDF) said it had been forced to respond to militant rocket fire.”

As we see, none of the six items above adequately clarifies to BBC audiences the actual sequence of events. The incidents in Rafah are presented in a disjointed, context-free manner which fails to clarify to readers the connection between them and the preceding attack against Israeli soldiers. As usual, no attempt is made by the BBC to determine whether any of the casualties in Rafah were terrorists.

Hamas claims are presented to audiences as though they were plausible versions of events and the promotion of Hamas propaganda appears in several of the reports. Notably, no attempt is made to provide audiences with any perspective concerning the possible connection between Hamas’ obviously false claims and its need to placate its Qatari and Turkish backers as well as other parties which took part in brokering this latest humanitarian ceasefire.

Part two of this post will look at the way in which the same events were presented to BBC television audiences.