In this post we will look at the way in which the breakdown of the August 1st humanitarian ceasefire – breached after 90 minutes by Hamas terrorists who staged an attack on IDF soldiers decommissioning a cross-border tunnel near Rafah – was presented to viewers of BBC television news.

For the timeline of events see part one of this post.

Early on the morning of August 1st – before the humanitarian ceasefire had been breached – viewers of BBC television news saw a report by Jon Brain titled “Israel and Hamas 72-hour truce begins” in its website version. Brain opened that report with more of the BBC’s context-free presentation of casualty figures it has not independently verified. 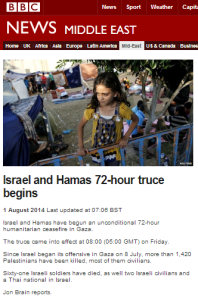 “Released by the Israeli military, this video footage apparently shows an air strike being aborted because Palestinian children were seen moving around on the ground. But many other children have not been so fortunate; victims of a conflict which has now claimed more than fourteen hundred Palestinian lives and displaced tens of thousands of people. Sixty-three Israelis – nearly all of them soldiers – have also died.” [emphasis added]

As we see, the policy of not informing audiences that a proportion of the Palestinian casualties are terrorists and not clarifying that the source of casualty figures is either Hamas itself or politically motivated organisations continues. Later on, Brain comes up with this curious statement:

“For its part, Israel has insisted it won’t end its military operation until tunnels built by Hamas have been destroyed. It claims they’re a direct threat to Israeli security.” [emphasis added]

Apparently the BBC believes it may be possible to have a different interpretation of underground cross-border tunnels constructed by a proscribed terrorist organization which infiltrate the territory of a sovereign country. Brain also informs viewers that:

“Previous ceasefires have been broken within hours.”

Significantly, he does not however inform them that those breaches of previous ceasefires were all carried out by Hamas.

Later on, after the ceasefire had been breached by Hamas, filmed BBC report by Martin Patience was shown to television audiences -“Israel to resume Gaza operation as truce with Hamas crumbles“. As was the case in one of the written reports which appeared on the BBC News website, Patience promotes the notion that: 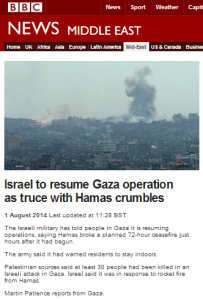 “People here always knew that it [the ceasefire] was going to be shaky, that – yes – there would be violations.”

“I think there is surprise, though, that it’s crumbled after just four and a half hours and it seems to have been triggered by that very serious incident down in Rafah. The latest we have from Palestinians are that at least four Palestinian…ah….Palestinians have been killed by Israeli tank fire as you were saying David.”

Did Patience almost slip up there and say “at least four Palestinian militants”?

“Israel says that one of its kibbutz [sic] in the southern part of the country had been attacked and it was responding to fire.”

Still later in the day, viewers of BBC television news saw a report by Nick Childs. The synopsis to that report as it appears on the BBC News website under the title “Gaza ceasefire collapses: What fate for talks?” reads:

“Palestinian sources said at least 30 people had been killed in an Israeli attack in Gaza on Friday, just hours after a ceasefire was called. A senior Israeli official said Hamas had breached the ceasefire and Israel’s response would be “crushing”.”

The report itself makes no attempt to inform audiences why the humanitarian ceasefire collapsed.

On the evening of August 1st viewers saw a report by Jon Donnison, which appears under the inaccurate and misleading title “Gaza militants ‘seize Israeli soldier’ as ceasefire ends” on the BBC News website. The actions of the Hamas terrorists were in fact what ended the ceasefire: they did not – as this title suggests – occur at the end of the ceasefire.

Donnison’s report begins in a maternity ward, with a doctor interviewed saying:

“We hope, we hope that Israeli they respect the ceasefire and Palestinian because we have to take a risk for this massacre and this disaster in the Gaza Strip.”

Donnison then moves on to Beit Hanoun, failing to inform audiences that the area has been a major location of missile fire into Israel or to raise the very realistic possibility that some of the damage to buildings his cameraman films extensively may have been the result of the terrorists’ practice of booby-trapping houses: a subject which the BBC has not touched at all in any of its coverage. He goes on to address the topic of the breached humanitarian ceasefire, notably presenting events in an inaccurate order which misleads viewers.

“But the ceasefire was over almost as soon as it had started. More Israeli airstrikes and Palestinian rockets. At least fifty Palestinians were killed today; many more were wounded. And then, from Rafah in the south of Gaza, the news that could see this conflict escalate still further. An Israeli soldier suspected to have been captured alive by Hamas fighters after they crossed the border through a tunnel. Israel says one fighter detonated a suicide belt as he emerged from underground. Two soldiers were killed and 23 year-old Hadar Goldin was dragged back into Gaza.”

Contrary to Donnison’s statements, the incident in which 2nd Lt. Goldin was abducted was the event which breached the ceasefire and it took place before any “Israeli airstrikes”. It also took place near Rafah – not, as Donnison claims, on the Israeli side of the border.

Equally inaccurate is Donnison’s later claim that Gilad Shalit was abducted “in Gaza”. That incident did take place on the Israeli side of the border.

“Hamas will see this as a huge result. It took more than five years for Israel to free the last soldier captured in Gaza, Gilad Shalit.”

Another filmed report shown to viewers of BBC television news was produced by Ian Pannell. It also appears on the BBC News website under the title “Palestinians return to gutted homes during brief ceasefire“. 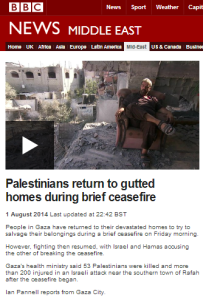 Like his colleague Jon Donnison, Pannell fails to provide viewers with the information necessary to provide context to the scenes of damaged buildings shown in his report.

“…but today Gaza woke to news of a ceasefire. The guns fell silent and families cautiously walked back to their homes. This is what they found. Whole neighbourhoods gutted. Israel says it’s self-defence against a terrorist threat. [….]

The houses lie close to the border. Israel says militants built tunnels under the area. But for those who live here, it feels like collective punishment.” [emphasis added]

Pannell’s description of the collapse of the ceasefire starts out accurately from a chronological point of view, but notably he fails to identify the party which initiated the violence, promotes some Hamas propaganda and fails to inform viewers how many of those killed in Rafah were terrorists.

“It lasted just a few hours. After two Israeli soldiers were killed and an officer captured, the ceasefire was over; both sides accusing the other of breaking the truce. More than fifty people were killed in the town of Rafah.”

Perhaps surprisingly, the most accurate timeline of events in any of the filmed reports shown to BBC television news viewers came from Orla Guerin. Her report of August 1st – also inaccurately and misleadingly titled “Israeli soldier ‘captured’ by militants as ceasefire ends” in the version appearing on the BBC News website – opens: 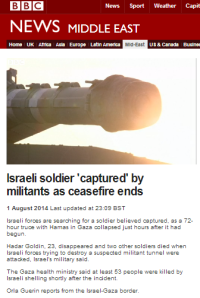 “[…] The ceasefire was supposed to last three days. It didn’t last three hours. At half past nine 23 year-old Hadar Goldin was captured in Gaza. The soldier was taken by militants who emerged from a tunnel.”

Getting both the chronology of events and their location right – in contrast to many of her colleagues – Guerin later states:

“Soon after the latest abduction shells rained down in Rafah where the soldier was taken.”

However, Guerin repeats the same inaccuracy which appeared in Jon Donnison’s report regarding the location of the abduction of Gilad Shalit in 2006.

Still later in the report, Guerin visits Kibbutz Kfar Aza and for the first time, BBC audiences hear – albeit very briefly – that not just people in Gaza have been displaced from their homes during this conflict, but Israeli residents of communities near the border too. In contrast to the ample reporting on the topic of displaced persons in the Gaza Strip, the subject of displaced Israelis has not been covered at all by the BBC.

A report by Jon Brain from the morning of August 2nd (“Gaza conflict: Hamas denies holding Israeli soldier“) seems to start promisingly when it presents the abduction and the later fire on Rafah in the correct chronological order. However, that report soon descends into promotion of Hamas propaganda, including an interview with Hamas’ Fawzi Barhoum.

“Each side is blaming the other for breaking the truce.”

“However, Hamas claims it has no information about the missing soldier and blames Israel for the renewed violence.”

Barhoum: “The Israeli enemy is the one that breached the truce when Israeli Special Forces entered the eastern side of Rafah. The Palestinian resistance clashed with them and this was our right to defend ourselves.”

Significantly, neither Brain nor any other BBC journalist reporting on this issue bothered to clarify to audiences that the Israeli soldiers who were attacked were in the process of decommissioning one of Hamas’ attack tunnels at the time – in line with the terms of the ceasefire.

As we see from this selection of filmed reports shown to viewers of BBC television news, the majority of them – like the BBC News website’s written reports discussed in the previous post – come nowhere near to informing audiences clearly, accurately and impartially of the event which breached the humanitarian ceasefire of August 1st. That failure is exacerbated by the amplification of Hamas propaganda which only serves to further prevent audiences from properly understanding why this latest ceasefire failed.