“Firepower: The destructive capacity of guns, missiles, or a military force (used with reference to the number and size of guns available)” [source]

On August 7th the BBC’s chief international correspondent Lyse Doucet produced two items on the same theme – one filmed for BBC television news and one written – both of which appeared on the BBC News website’s Middle East page. The written item (still in place at the time of writing) is titled “Israelis along the Gaza Border keep calm and carry on“. At the head of that article appears the photograph below with the following caption: 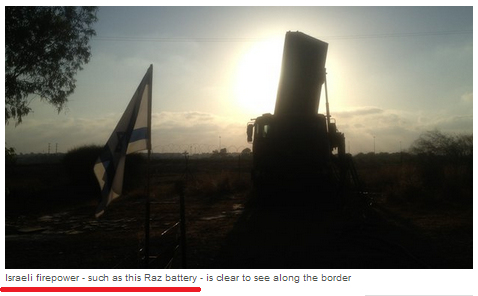 The Raz is in fact a radar system – brought into use in 2010 – which identifies the launch location (in this case in the Gaza Strip) of incoming missile and mortar fire to Israel and calculates the expected landing site. It forms part of the early warning defence system and hence its description by the BBC News website caption writer as a component of “Israeli firepower” is inaccurate – not least because it doesn’t fire anything. 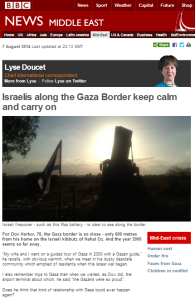 Moreover, whoever wrote that caption obviously did not read the article itself because there Lyse Doucet describes exactly what the Raz system does:

“The Raz tracks where rockets are being fired from, and where they will land. That intelligence feeds into the Iron Dome to help it intercept incoming fire.

It also alerts Israeli citizens to take to their shelters, and allows commanders to take decisions on where to return fire.

On the wall, handwritten letters from Israeli children, with big yellow suns and brightly coloured flowers, thank the soldiers for keeping them safe.”

However, as we have seen so often with other BBC reporters on the ground in the past few weeks, Doucet apparently lacks the military knowledge necessary to enable her to join the dots and present audiences with a clear picture of events in the Gaza Strip. In the filmed version of this report – “Israeli army say main objective in Gaza achieved ‘completely’” – Doucet says:

“But Gaza is still in Israel’s sights. This is its state of the art radar – the Raz. We’re the first foreign media to film here. We’re not allowed to show the screens. They track where rockets are launched in Gaza, where they’ll land here.”

She then asks the Captain:

“Why is it that targets like a school, a shelter, a United Nations shelter would have been hit so many times if you have such good intelligence?”

“As I said, we are pinpoint the fire. We know where the fire comes from. We know where it’s fall. And we …but in this room we don’t have any decision related to attacks.”

Doucet: “So you just send the information.”

Captain: “We send the information.” 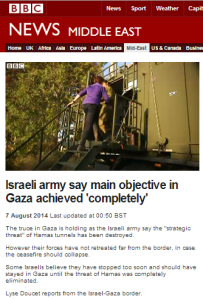 “I ask why with such good intelligence, there have still been – according to the UN – repeated strikes on the schools serving as shelters for the many thousands of displaced people in Gaza.

“We don’t take those decisions here,” one soldier explains, pointing out that the Raz is only one of the tools used by Israeli forces. Then he adds quickly: “But it is clear that, sometimes, rockets are fired from schools, hospitals and other civilian places”.”

This of course would have been an ideal moment for the BBC’s chief international correspondent to fulfil the corporation’s obligations to its funding public at long last by properly clarifying the issue of the practice adopted by Hamas and other terrorist organisations of setting up missile launching sites and firing sites in or near civilian facilities and the resulting dangers that tactic creates for the civilians of Gaza. Doucet passed up on that chance.

It would also have been a good opportunity to explain to viewers and readers that when the IDF says that terrorists launched missiles from a specific location at a certain time and can also state where those missiles landed, it has the evidence to back that up. That was not done either.

Doucet could also have tried to explain to BBC audiences why – given the above facts and what she has now seen with her own eyes – the BBC still insists upon characterising the incident on July 28th in Shati, in which ten people (including eight children) were killed by a shortfall missile launched by terrorists, as “disputed“.

BBC audiences would no doubt have been fascinated to hear the explanation for that.