Here’s an item with absolutely no news value which the BBC News website’s editors obviously wanted to make very sure that audiences did not miss.

An article titled “Holocaust survivors condemn Israel’s Gaza ‘genocide’” from the evening of August 23rd is basically nothing more than a collection of selected quotes from a statement put out by the small, extremist fringe group IJAN and reproduced (presumably in return for payment) in several newspapers.  Not only was that ‘article’ promoted in two separate locations on the website’s Middle East page, but a link to the statement was also placed in the day’s main article titled “Gaza conflict: Mahmoud Abbas urges fresh talks in Egypt“.

“In a separate development, more than 300 Jewish survivors of the Holocaust and descendants of survivors have issued a public statement condemning Israel’s action in Gaza.” 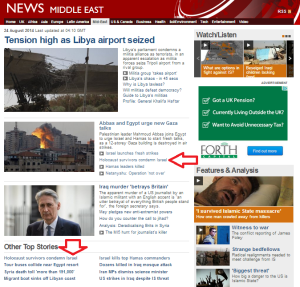 IJAN’s raison d’être is its opposition to the existence of the world’s one and only Jewish state.  Its methodology includes the adoption of the halo of Holocaust survival as a means of conscripting supposed authority and moral superiority to its claims and statements. At the same time, it uses Holocaust inversion such as the example in this latest statement which – as reflected and promoted in the BBC’s headline – seeks to equate Israel with Nazi Germany by falsely claiming that it is carrying out “genocide”.

The BBC’s dismal record on recognizing and reporting antisemitism means that it comes as no surprise to find that two points which should be perfectly obvious to BBC editors unfortunately require clarification.

The denial of the Jewish people’s right to self-determination – as promoted by IJAN – is antisemitism even if it comes from people with some connection to Holocaust survival.

“Examples of the ways in which antisemitism manifests itself with regard to the State of Israel taking into account the overall context could include:

Denying the Jewish people their right to self-determination, e.g., by claiming that the existence of a State of Israel is a racist endeavor.”

The use of Nazi analogies is also antisemitism.

“Examples of the ways in which antisemitism manifests itself with regard to the State of Israel taking into account the overall context could include:

Drawing comparisons of contemporary Israeli policy to that of the Nazis.”

The BBC knows full well that no “genocide” of the Palestinian people is taking place in Gaza or anywhere else and yet it promotes that defamatory falsehood both in its headline and in the body of its article (and no: the use of punctuation does not mitigate that editorial decision) without bothering to inform readers that the allegation has no basis.

“More than 300 Jewish survivors of the Holocaust and descendants of survivors have issued a public statement condemning Israel’s “genocide” of the Palestinian people in Gaza.”

Had a small, fringe racist organisation from, say, the far-Right of the British political map put an equivalent advert in a paper falsely accusing a certain ethnic or religious group of non-existent crimes against humanity we would (one trusts) be unlikely to see the BBC promoting and amplifying such defamatory incitement without comment or clarification of the inaccurate nature of the allegation.

“If we broadcast anything that harms the reputation of an individual, a group, or an organisation we may be sued for defamation. The risk exists whether the defamatory statements are scripted or spoken off the cuff. Subject to the defence of innocent dissemination (the “live defence”), the BBC can be liable, as broadcaster, regardless of who makes the defamatory comments.”

But when what is probably perceived as a far-Left racist organisation makes defamatory anti-Israel statements, the BBC News website promotes them with gusto. Whoever made that miserable editorial decision must be brought to account.