Judging by our inbox, quite a few of the people listening to BBC Radio 4 whilst in the midst of preparations for Rosh HaShana eve on September 24th were not amused by the BBC’s decision to air the polemics of anti-Israel activist Jeremy Hardy in an episode of the programme “Jeremy Hardy Speaks to the Nation” titled “How to Define Oneself in Terms of Regional, Cultural and Geopolitical Identity Without Tears”. 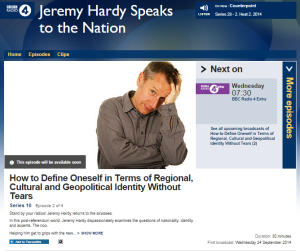 Although Hardy’s show is ostensibly a comedy programme, even he describes the relevant parts of the programme (available for a short period of time here, mostly between 08:50 – 13:00 and 16:32 – 17:09 and also scheduled for repeat) in terms of his ability to “pontificate pompously”. On that point at least Hardy is not wrong; his ensuing monologues are however considerably less accurate. [all emphasis added]

“People who don’t have the right to national self-determination are likely to want it. Tamils, Tibetans, Basques, Kurds, Palestinians. And to take one of the more talked-about territorial disputes of our age, the State of Israel came about because some Jewish people wanted somewhere that a widely persecuted, dispersed, ethno-religious group could have a national home. Sadly one of the things that shapes our identities is other people being bastards to us. […] Zionism was a mixture of secular nationalism, religious separatism and desperation. The main problem with the plan was that the place chosen already had people living there. Palestine was ruled by Turkey until the First World War, after which it fell under British colonial administration. Yes – I’m afraid it’s another one of ours: we who have been responsible for so many partitions and nearly got our comeuppance last week.

The first British governor of Jerusalem, Sir Ronald Storrs, described the idea of the new Jewish homeland as ‘a little loyal Jewish Ulster in a sea of potentially hostile Arabism’. A prescient warning you might think, but this was a man speaking in favour of the idea. And the British encouraged significant Jewish migration on taking charge. There is the narrative that Palestine had been an empty wasteland – which is a lie. Yes, the new arrivals were industrious: you’re not gonna get that many people turning up from Poland without seeing a lot more construction than the British would get. But there were already Palestinian towns, villages and farms, mosques and churches that had been there for centuries.

Nevertheless, even some of Israel’s most passionate critics today are people who supported its founding in 1948. They argue that although Israeli governments are increasingly racist and colonial, the founding principles were noble. Other critics would see even that view as rosy-spectacled but whatever you think about that period, the State of Israel exists and one of the frequent demands of its government is that others recognize its right to exist. I’m not sure any state has rights. Whether a person has rights is a moral question – they’re not like kidneys – but at least ethical judgments apply more sensibly to human beings. We’d all say a person has a right to a house. We wouldn’t say the house has rights. No-one thinks a house has a right to exist: certainly not an Israeli driving a bulldozer.

Let’s imagine that all Israel’s critics recognize its right to exist as a de-facto state. That wouldn’t guarantee its continued existence in its present form or any other. Even now we don’t even know where its borders are supposed to be, so what are we ratifying? That’s what happens when you’re greedy: you keep getting bigger and bigger and bigger – people have trouble recognizing you.

And there might be a two-state or one-state solution. Over time states come and go. Yugoslavia doesn’t exist – it lasted 70 years and broke up disastrously on ethnic lines. Czechoslovakia lasted about the same length of time and split peacefully on ethnic lines. But Belgium was formed 140 years ago and still exists – if you can call it that. The Israeli government further complicates matters by insisting the country is not only recognized as a state, but as a Jewish state. But most Jewish people don’t live there; thankfully because we need them. One of the most popular voices on Radio 4 is that of Michael Rosen – the non-Zionist Jewish poet and children’s author. It would have been our loss if his parents had decided to raise him in Israel rather than north London and what a horrible book ‘We’re Going on a Bear Hunt’ might have been. How many bears might have died on the pretext of the one he was looking for? Moreover, many Israelis have only little Jewish ancestry or none. Even without the occupied territories, a fifth of the population is Palestinian and demographics change and ideas about who we are change. […]

Speaking of food, Israelis famously insist the falafel is their national dish. Now you can lay claim to a two thousand year-old wall, but that’s just taking the piss. Of course falafels have always been eaten by Middle Eastern Jews – they were Middle Eastern people. That underlines the differences between those Jews and the Europeans who came to the region. And yes – we white Britons say the curry is our national dish, but we say it in a self-mocking way that acknowledges and thanks the various cultures that have improved ours. We don’t say it to celebrate the lasting trauma we brought to the Indian sub-continent. Well the BNP claims that we invented the curry during the Raj, but they are founded on an ideology that gave quite a boost to the idea that Europe’s Jews might be safer in a Middle East hotspot.”

So as we see, in addition to inaccuracies such as the representation of the Mandate for Palestine as a British colonial project, the claim that the British “encouraged Jewish migration”, the (obviously) unsupported claim that Israeli governments are “racist and colonial” and the falsehood that “greedy” Israel is “getting bigger and bigger”, Hardy aims for cheap and easy laughs by using offensive stereotypes of Israelis as being violent and aggressive.

Given Hardy’s track record of collaboration with the ISM, one would probably not have expected anything other than the exploitation of a ‘comedy’ show for the promotion of his own embarrassingly uninformed politics. That, of course, is a factor of which Radio 4 editors must have been aware in advance but, as we have seen before, the BBC seems to think that the promotion of inaccurate information and crude national stereotypes is perfectly acceptable – just as long as a ‘comedy’ label is appended.