As regular readers know, whilst the BBC has still not comprehensively and accurately informed its audiences what happened during the battles in the Gaza Strip neighbourhood of Shuja’iya in July of this year or why the fighting there was so intense, it has – on the other hand – devoted much airtime and column space to context-free depictions of the destruction of buildings in that district. November 28th saw the continuation of that practice in an article which appeared on the BBC News website’s Middle East page under the title “Gaza floods: UN declares state of emergency“. 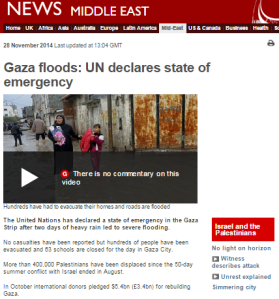 That report was presented on the Middle East page together with links to four additional items of recommended reading which included Yolande Knell’s problematic feature on Shuja’iya from September 15th and her August 19th report “Gaza’s infrastructure crippled by conflict“.

In this article, readers were informed that:

“In the Shejaiya neighbourhood, where air strikes during the recent conflict damaged many of the buildings, residents already face a cold winter without electricity or water.”

An illustrative photograph was captioned:

No mention was made of the very relevant fact that Shuja’iya was the location of considerable Hamas infrastructure, including the entrances to numerous cross-border attack tunnels, weapons stores and missile launching sites.

Also evident in this report is the BBC’s continuing practice of quoting old UN statements on the subject of civilian/combatant casualty ratios in the Gaza Strip which were already problematic at the time they were published and have been shown to be even more so in the light of subsequent research – completely ignored by the BBC – which indicates that the ratio between civilians and combatants is similar.

“The seven-week Gaza conflict, which ended in a truce on 26 August, killed more than 2,100 Palestinians, most of them civilians, the UN says, along with 67 Israeli soldiers and six civilians in Israel.”

The flooding in the Gaza strip was also the topic of an item in the BBC World Service’s radio programme ‘Outside Source’ on November 28th (available here for a limited period of time from 27:15). Presenter Chloe Tilley spoke with BBC Arabic’s Shahdi Alkashif in Gaza City who, after describing the situation, told listeners:

“But this bad weather made the situation more worse here in Gaza Strip that is still under siege. And there is no enter now Israeli permits to allow to the building material to go to Gaza to rebuild the homes that destroyed it.”

As has been pointed out here before, the definition of the term ‘siege’ does not accurately describe the restrictions on the import of dual-use goods with the potential for use in terrorist activities which is applied to the Gaza Strip by Israel and yet, as we see, that Hamas-favoured terminology is still being used by the BBC. 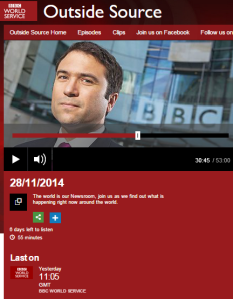 And what of Alkashif’s claim that Israel is not allowing building materials for reconstruction into the Gaza Strip? Let’s take a look at just a few of the recent reports from COGAT.

Clearly Alkashif’s presentation of that topic is inaccurate and misleading. Later on he also told BBC World Service listeners that:

Whilst the situation in the Gaza Strip may be far from ideal, it is certainly not accurate to say – as Alkashif does – that there is no electricity or clean water there at all.

Obviously Shahdi Alkashif’s reporting is neither accurate nor impartial and the BBC World Service needs to urgently correct the inaccurate impressions given to its listeners.