Much of the BBC’s reporting on the issue of the recent Palestinian Authority’s unilateral moves at the UN Security Council and the International Criminal Court has framed those moves as being a legitimate alternative to direct talks and has promoted the notion that negotiations between the parties are a means of solving the conflict demanded and imposed by Israel. 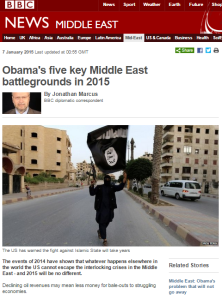 On January 7th an article by the BBC’s diplomatic correspondent Jonathan Marcus appeared in the Features & Analysis section of the BBC News website’s Middle East page under the title “Obama’s five key Middle East battlegrounds in 2015“. In that article Marcus also used the above theme:

“An early test of Mr Obama’s thinking may be how he responds to the Palestinians’ determination to pursue their quest for statehood by seeking membership of a variety of international organisations.

This runs against the basic Israeli and US position that the only way to peace is through direct talks between the parties themselves.”

Of course the principle according to which the conflict must be solved by means of negotiations is by no means merely an “Israeli and US position”: it is a principle to which the recognized representatives of the Palestinian people signed up over twenty-one years ago when Yasser Arafat sent his September 1993 letter to Yitzhak Rabin in which he stated:

“The PLO commits itself to the Middle East peace process, and to a peaceful resolution of the conflict between the two sides and declares that all outstanding issues relating to permanent status will be resolved through negotiations.” [emphasis added]

That same principle of direct negotiations underpins both the Oslo I and Oslo II agreements – also signed by the representatives of the Palestinian people and, no less importantly, witnessed and guaranteed by Jordan, the US, Egypt, Russia, Norway and the EU and endorsed by the UN.

Hence, when the BBC fails to inform audiences that the principle of conflict resolution by means of direct negotiations alone is not just an Israeli or American caprice but actually the mainstay of the existing agreements to which the Palestinians are party and the international community guarantors, it deliberately hinders audience understanding of the significance of the PA’s breach of those existing agreements by means of unilateral moves designed to bypass negotiations.

If the BBC is to fulfil its obligations to its funding public, it must begin to present this topic accurately and impartially.