A particularly noticeable characteristic of BBC reporting on the Paris terror attacks has been a general avoidance of any meaningful discussion of the actual issue of Islamist extremism.

Instead, BBC audiences have seen, read and heard numerous commentators bemoaning the social conditions which supposedly turn disadvantaged and alienated youths into Jihadist terrorists. On other occasions, the Charlie Hebdo magazine has been described as ‘racist’ as though that misapplied label somehow provides relevant context to the premeditated murders of seventeen people. And in other cases audiences have been herded towards a view according to which if Jews are attacked in Paris, it is ultimately the fault of other Jews because of things they do – or do not do – in another part of the world.

We will be providing additional examples in future posts, but here is one which appeared on BBC Radio 4’s ‘World at One’ on January 13th as the four victims of the Hyper Cacher terror attack had just been laid to rest in Jerusalem. 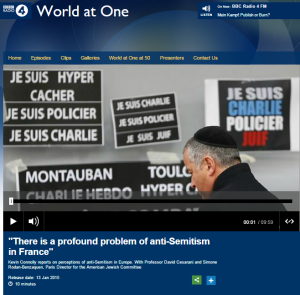 The first part of this segment from the programme consists of a report from Kevin Connolly about French Jews to which we will return later. In the second part – from 03:50 – the programme’s presenter Shaun Ley introduces two interviewees:  Simone Rodan-Benzaquen, Paris Director for the American Jewish Committee and Professor David Cesarani – described by Ley as “professor of history at Royal Holloway University of London” and someone who “has written extensively on Jewish history and is an authority on the Holocaust”.

Shaun Ley: “Well the number of Jews leaving France, as Kevin was saying, has certainly risen: almost seven thousand last year – twice as many as the year before. But is Binyamin Netanyahu right to talk of rising antisemitism in Europe and is emigration the answer?”

Of course contrary to the impression given in this item, it is not just the prime minister of Israel who talks about a rise in anti-Semitism in Europe; many bodies and organisations are recording and noting that trend, including the ADL, the CST and the Mayor of London. The French government had recognized the gravity of the situation even before the latest attacks.

“…in 2014 the antisemitic incidents [in France] increased by 91%. All too often people forget that half of the incidents classified as “racial incidents” are directed against Jews. This, in spite of the fact that they form less than 1% of the general population. Under these circumstances it is understandable that the Minister of the Interior has recently declared that the “struggle against racism and anti-Semitism” is “a national matter”.

“David Cesarani – do you think that Binyamin Netanyahu had a point when he suggested that there is a momentum now to leave France because of not just this incident but because of some of the previous incidents [the murder of Ilan Halimi in 2006 and the murders of four people at a Jewish school in Toulouse in 2012 – Ed.] to which Simone referred?”

Ceserani: “No I don’t think Binyamin Netanyahu had a point and I think his comments have been inflammatory.”

Ceserani goes on to tell BBC audiences that “Jews in France have lived through much worse times than these” and that “things have been worse even in recent French history” before delivering the following statement:

“But we cannot overlook the tension between Jews and Muslims in France. The conflict in the Middle East has got a lot to do with that and I think that’s where Mr Netanyahu can play a role. I think if Mr Netanyahu can bring life to the peace process then I think a lot of that tension will subside.”

As is all too often the case at the BBC, we see the Palestinian-Israeli conflict being promoted here as the conflict in the Middle East even as Jihadist extremists in Syria and Iraq continue to kill thousands of their own countrymen. Predictably too, we see the fact that Islamist extremism is a significant factor in the Palestinian-Israeli conflict being ignored and erased. Responsibility for the failure to bring that conflict to an end is of course placed entirely on the shoulders of one party to it and even one specific politician – despite the similarly unsuccessful attempts of his predecessors. According to Cesarani, the Palestinians have no agency and no role to play in finding a conclusion to the dispute but if only the Israeli prime minister would change his ways, then the “tensions” which he apparently believes bring about both antisemitism and terror attacks would “subside” and French, British, Belgian and Dutch Jews could live in peace.

BBC Radio 4 clearly has no qualms about providing Cesarani with a soap-box from which to promote his own political views in the guise of ‘expert analysis’. That of course is an issue in itself, but the main point here is that listeners are being distracted from and misled about the real background to the murders in Paris by means of this superficial exploitation of a tragedy for political messaging.

Kevin Connolly’s segment which began this item is very similar to an article he wrote on the same topic which appeared on the BBC News website’s Middle East page under the title “‘Not safe’: French Jews mull Israel emigration” on January 13th. In both those reports Connolly highlighted the words of one of his interviewees with the written version going as follows:

“It’s only fair to point out that Mr Levy blames the media at least in part for the current atmosphere and argues that it has tended to demonise Israel in recent years in the wake of events ranging from the first Gulf war to the first and second Intifadas.

That perhaps is a debate for another time – and it is worth pointing out that France naturally insists that its Jewish population can safely remain there.”

Actually, that is not “a debate for another time”: it is one in which some of us have been engaged for years already and it is also one which – as this Radio 4 programme once again indicates – it is long past time for BBC journalists to join.

10 comments on “BBC R4: Paris ‘tensions’ due to Israel’s failure to make peace”