A tweet sent from the account of BBC One’s “moral, ethical and religious debate” programme ‘The Big Questions’ on January 25th has understandably caused something of a stir. 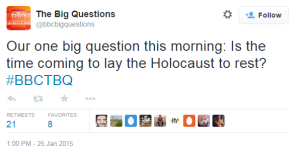 In fact, the provocative question posed in that promotion was not the “one big question” discussed in the edition of the programme broadcast on the same day as readers unable to access BBC iPlayer can see for themselves below. No less contentious than the wording of that tweet was the fact that the programme’s subject matter was allowed to be exploited for opportunistic promotion of political propaganda by Nira Yuval-Davis of the University of East London.

“And part of the problem that we see is that on the one hand we see how Israel is using – very cynically unfortunately – this very important memory of the Holocaust. […]

[…] the fact [is] that the prime minister of Israel, whenever there is a diplomatic visit, he’s taking people to Yad Vashem – the memorial museum – and in order to show them this [is] what happened to Jews in the Holocaust as a preventative measure for any critique of Israeli policies.”

To be clear, the people sitting on the front row are invited guests and like all panel members appearing on ‘The Big Questions’ they would have been ‘vetted’ by the production team before their appearance on live television. That means that Nicky Campbell and his team must have known full well that they had invited an anti-Zionist, BDS-supporting proponent of the notion of the establishment of Israel as a project of “settler-colonialism” to appear on the panel of the edition of their programme advertised as part of the BBC’s Holocaust Memorial Season.