The video below shows footage taken at a youth camp for 15 to 21 year-olds recently organized in the Gaza Strip by Hamas’ Izz Al-Din Al-Qassam Brigades.

Among the few Western media outlets which reported that story were the Washington Post and the Telegraph.  However, a tweet from Lyse Doucet suggests that the BBC is also going to cover the topic at some point. 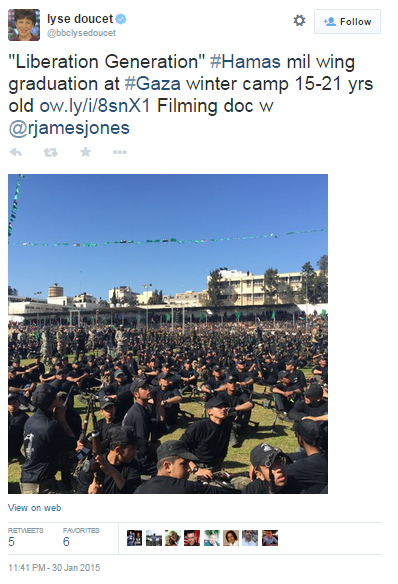 Whether or not this is part of the documentary on children in the Gaza Strip about which Doucet was interviewed by the Guardian last September is not clear. It will however be interesting to see whether the opportunity is used to inform BBC audiences about Hamas’ use of child soldiers – including during the most recent conflict – and whether or not it will be clarified that one of the UN conventions signed by the Palestinian Authority in April 2014 was the Convention on the Rights of the Child on the Involvement of Children in Armed Conflict, according to which no soldier should be under the age of 18.

2 comments on “Is a BBC documentary about Hamas’ child soldiers upcoming?”