Below is our regular end of month count of written articles appearing on the Middle East page of the BBC News website according to the twenty-two countries and territories defined by the BBC as making up that region per the profiles on that page.

As in previous months (see ‘related articles’ below), the count relates to three categories of articles – headline, non-headline and features – with the total representing both the appearance of a report and its level of exposure in terms of the number of days it stayed up on the site. Non-specific articles which cannot be categorized according to country are not included. 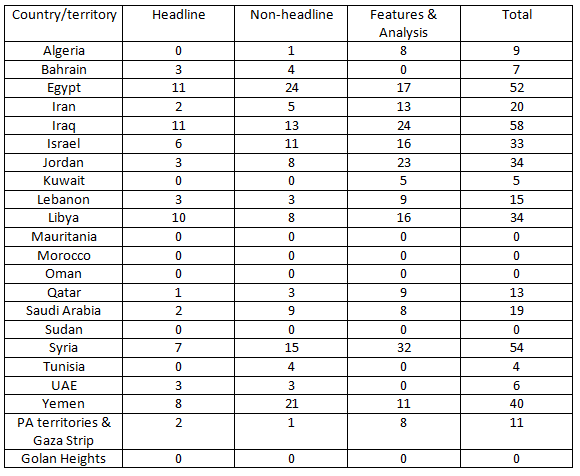 The country receiving the most exposure on the BBC News website’s Middle East page during February 2015 was Iraq, with the vast majority of that coverage relating to ISIS and very little other news not connected to that topic. With regard to Syria – in second place – the picture is much the same. Egypt received the third most exposure during February – in large part in relation to the story of Al Jazeera journalist Peter Greste and his colleagues. Continued political unrest in Yemen meant that country came fourth in terms of exposure, followed by Libya (for the same reason) and Jordan – almost exclusively in relation to the Jordanian pilot murdered by his ISIS captors.

In fact, coverage of Jordan during February 2015 was equal to 65% of the coverage of that country on the BBC News website’s Middle East page throughout the whole of 2014, indicating once again that the journalistic focus on ISIS related stories apparent since last summer often comes at the expense of other Middle East news.

For the first time in the two years in which we have been tracking coverage, Israel (in seventh place) was not among the top five countries receiving the most exposure during February 2015. 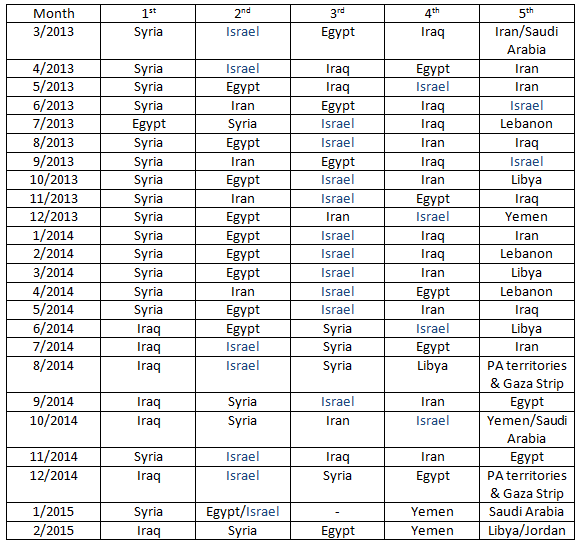 When we began this project back in March 2013 we raised the question of the connection between the BBC’s disproportionate focus on Israel and the fact that its main Middle East base is located in Jerusalem. As we have seen throughout the last two years, some countries with a smaller BBC presence – for example Lebanon – certainly receive much less exposure and those with no permanent BBC correspondent are largely off the radar of BBC audiences.

As was noted here at the end of 2013 and again at the end of 2014, the view of the Middle East being provided to BBC audiences continues to focus on specific topics to the detriment of the corporation’s stated aim of enhancement of audiences’ knowledge and understanding of the region in its entirety.

An overview of BBC coverage of the Middle East in 2014

2 comments on “BBC Israel focus in numbers: February 2015 & two year round up”