As has already been noted on these pages (see related articles below), the BBC News website’s portrayal of the framework agreement between the P5+1 and Iran announced on April 2nd has been based exclusively on the US administration’s presentation of its supposed terms. Not only have BBC audiences not been provided with details of the markedly different Iranian interpretation of the framework agreement; they have barely been informed of its existence apart from the following cryptic reference in an article by Barbara Plett Usher from April 5th:

“”Optics” went into play immediately. The Americans released a fact sheet describing details of what had been agreed.

“There is no need to spin,” Mr Zarif fired back on Twitter.

Senior US officials said both sides understood they would have different narratives, but wouldn’t contradict each other.

They knew Mr Zarif would present the framework agreement as one that “enables Iran the ability to access peaceful nuclear energy,” they said.”

On April 9th Iran’s Supreme Leader broke his silence on the topic of the framework agreement in a speech delivered at an event marking the Islamic Republic’s ‘National Day of Nuclear Technology’ and the BBC News website subsequently published a report titled “Iran nuclear: No guarantee of final deal, Khamenei says“. 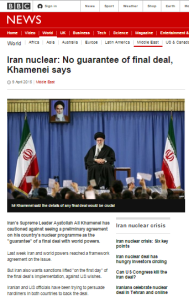 The BBC’s account of that speech (transcript available here) amounts to the following:

“Iran’s Supreme Leader Ayatollah Ali Khamenei has cautioned against seeing a preliminary agreement on his country’s nuclear programme as the “guarantee” of a final deal with world powers. […]

In a statement on his website, Mr Khamenei said “it is possible that the untrustworthy side [the six world powers who negotiated the agreement] wants to restrict our country in the details”.

“I have never been optimistic about negotiating with America. While I was not optimistic, I agreed with this particular negotiation and supported the negotiators,” the statement went on.

Mr Khamenei also echoed earlier comments by Iranian President Hassan Rouhani, in which he insisted that sanctions must be lifted as soon as a final deal was implemented.”

The BBC’s report also includes a summary of the terms of the framework agreement with a link to an EU statement on the topic.

In return, UN sanctions and separate measures imposed unilaterally by the US and EU will be lifted as the global nuclear watchdog, the International Atomic Energy Agency (IAEA), confirms Iranian compliance.”

Readers are not informed that Khamenei’s speech included the following statement on the subject of inspections to confirm compliance:

“One must absolutely not allow infiltration of the security and defense realm of the state on the pretext of inspection[s], and the military authorities of the state are not – under any circumstance – allowed to let in foreigners to this realm under the pretext of inspection, or stop the country’s defense development… Any unconventional inspection or monitoring which would make Iran into a special case, would not be acceptable, and the monitoring must only be as monitoring regimes taking place all over the world and nothing more.”

A link to the US State department’s factsheet is again promoted later on in the article – as has been the case in numerous previous ones – but yet again readers are not informed of the details (or existence) of Iran’s own factsheet. Under the sub-heading ‘Snap back’ the BBC states:

“On Thursday, the US state department repeated this view. “Under the agreed-upon parameters, sanctions will be suspended in a phased manner upon verification that Iran has met specific commitments,” spokesman Jeff Rathke told reporters.

It has published what it sees as the parameters of the agreement, one of which states: “If at any time Iran fails to fulfil its commitments, these sanctions will snap back into place.””

Again, readers are not fully informed of the content of Khamenei’s speech relating to the topic of sanctions and what bearing that has on the viability of potential ‘snap back’ of sanctions.

The BBC’s vague portrayal of those statements amounts to:

“Mr Khamenei also echoed earlier comments by Iranian President Hassan Rouhani, in which he insisted that sanctions must be lifted as soon as a final deal was implemented.”

The BBC’s report includes some interesting ‘analysis’ from Kasra Naji of the BBC Persian service:

“Ayatollah Khamenei has decided to sit on the fence, for the time being. He says he will neither endorse or reject the agreement.

A lot of details will have to be dealt with, he says, before the preliminary agreement from last week will turn into a final agreement at the end of June – the deadline the two sides have set themselves for a comprehensive solution to Iran’s nuclear problem.

But by not rejecting it, he has, in effect, consented to the premise of the agreement – that Iran would limit its nuclear activities in return for the lifting of sanctions. And that is a major step for the hardliners in Iran, including the country’s leader.”

In fact, Khamenei made it very clear that from his perspective there is to date no agreement to either endorse or reject:

“There are those who ask, why has the Leader not made his positions known concerning the latest nuclear negotiations? The reason for the Leader not taking position is that there is nothing to take a position about. The officials of the state and those responsible in the nuclear field say no job is done and there is no necessity… If the question is posed to me: ‘Are you for or against the latest nuclear negotiations,’ I would answer that I’m neither in favor nor opposed to it, since nothing has happened yet… All the trouble arises when the details will be discussed… the White House, only two hours after the end of the negotiations, published a few pages, which in most regards was contrary to the realities, explaining the negotiations… they were producing a statement which was faulty, incorrect and contrary to the substance of the negotiations.”

The bizarre reassuring spin put on Khamenei’s words by Naji according to which he “consented to the premise of the agreement” ignores the substantially conflicting views of the agreement presented in the various factsheets produced by parties to the negotiations as well as the fact that in this speech Khamenei clearly not only rejected the version of the agreement put out by the US State Department but also introduced ‘red lines’ on sanctions and inspections which do not conform to the version of the framework agreement promoted by the US and faithfully quoted and promoted by the BBC.

Following that exercise in spin, BBC audiences were pointed in the direction of the ‘real hardliners’:

“The deal was celebrated by many in Iran but was dismissed by hardliners who say Iran surrendered too much in exchange for too little.

Similarly, some in the US Congress have been sceptical of the deal, while Israeli Prime Minister Benjamin Netanyahu has expressed fervent opposition.”

The BBC’s treatment of this topic continues to avoid providing its funding public with the comprehensive information needed in order to enhance their “awareness and understanding“. This particular article from the self-declared “standard-setter for international journalism” actively impedes understanding by means of the selective omission of information mixed with redundant spin-laden analysis.

Did the BBC News website’s reporting on the P5+1 framework agreement with Iran tell the whole story?