Despite its defined purpose of building “understanding of international issues”, the BBC has to date done little to inform its audiences on the topic of the approach to Israel prevalent among the Middle East’s rising force of Islamist Jihadists. Hence, one feature of an article which appeared on the BBC News website’s Middle East page on July 4th under the headline “IS affiliate in Egypt claims rocket attack on Israel” is particularly notable. 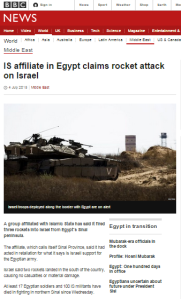 Readers were told that:

“A group affiliated with Islamic State has said it fired three rockets into Israel from Egypt’s Sinai peninsula.

The affiliate, which calls itself Sinai Province, said it had acted in retaliation for what it says is Israeli support for the Egyptian army.

Israel said two rockets landed in the south of the country, causing no casualties or material damage.”

Although the third missile was also found in Israeli territory on July 4th, that is a reasonable representation of events. However, audiences then went on to read the following:

The group said it had fired Grad rockets towards “occupied Palestine”.

Sirens were heard in communities in Israel’s Eshkol regional council, near the Gaza border.”

Given the BBC’s often curious use of punctuation, readers may well have concluded that the use of quotation marks around the words “occupied Palestine” signifies the use of a quote from the terrorist organisation’s Twitter account. Notably, no effort was made to clarify to readers – most of whom are unlikely to have much reason to be well versed in Israeli geography – that the area targeted in this missile attack cannot accurately be described as either ‘occupied’ or ‘Palestine’.

Not only is that point significant from the point of view of accuracy but of course the fact that an IS-affiliated group operating in Sinai regards the whole of Israel as “occupied Palestine” is indicative of the ideology underpinning the specific attack and the group’s approach to Israel in general.

No less remarkable is the fact that the BBC told its audiences about just part of the terror group’s announcement. As many media outlets – including the Times of Israel – reported:

“The IS-affiliated Wilayat Sinai in the Sinai Peninsula claimed responsibility for the attack.

“Three Grad rockets were fired at Jewish positions in occupied Palestine,” the group said Friday evening in a statement on Twitter.”

Not Israeli positions – but “Jewish positions”: that too is of course relevant information for anyone seeking to understand this particular ‘international issue’ but for some reason the BBC elected not to impart it to its readers.

How the BBC cherry-picked its Jihadist terrorists