Last September BBC Radio 4 aired an edition of the programme “Jeremy Hardy Speaks to the Nation” titled “How to Define Oneself in Terms of Regional, Cultural and Geopolitical Identity Without Tears” in which comedian-cum-political-activist Hardy promoted crude stereotypes and factual inaccuracies. 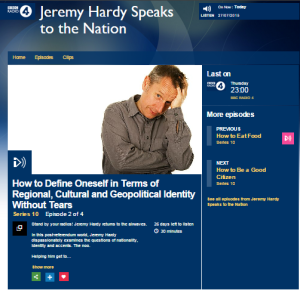 “Nevertheless, even some of Israel’s most passionate critics today are people who supported its founding in 1948. They argue that although Israeli governments are increasingly racist and colonial, the founding principles were noble. Other critics would see even that view as rosy-spectacled but whatever you think about that period, the State of Israel exists and one of the frequent demands of its government is that others recognize its right to exist. I’m not sure any state has rights. Whether a person has rights is a moral question – they’re not like kidneys – but at least ethical judgments apply more sensibly to human beings. We’d all say a person has a right to a house. We wouldn’t say the house has rights. No-one thinks a house has a right to exist: certainly not an Israeli driving a bulldozer.

Let’s imagine that all Israel’s critics recognize its right to exist as a de-facto state. That wouldn’t guarantee its continued existence in its present form or any other. Even now we don’t even know where its borders are supposed to be, so what are we ratifying? That’s what happens when you’re greedy: you keep getting bigger and bigger and bigger – people have trouble recognizing you. [emphasis added]

As was noted here at the time:

“Given Hardy’s track record of collaboration with the ISM, one would probably not have expected anything other than the exploitation of a ‘comedy’ show for the promotion of his own embarrassingly uninformed politics. That, of course, is a factor of which Radio 4 editors must have been aware in advance but, as we have seen before, the BBC seems to think that the promotion of inaccurate information and crude national stereotypes is perfectly acceptable – just as long as a ‘comedy’ label is appended.”

Despite that, ten months later on July 23rd 2015, BBC Radio 4 saw fit to broadcast that programme once again.