Early on the evening of September 2nd a house in the Western Negev agricultural community of Netiv Ha’Asara was hit by bullets fired from the Gaza Strip and two children had a very lucky escape. 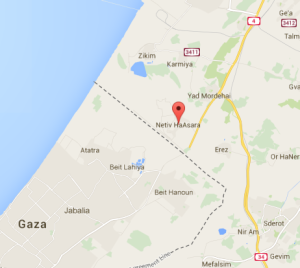 “One of the bullets shattered the window of a home in the Kibbutz Netiv Ha’asara and hit a television while two children, aged 6 and 9, were watching it.

The other hit a wall in the home just north of the Strip.

Their mother and a baby were also at home at the time. No injuries were reported.

Initial reports indicated the two bullets were stray sniper bullets that originated from a Hamas training camp on the other side of the border, the IDF said.”

Later that night the IDF responded with strikes on the source of the gunfire, which has for several months been a concern for residents of Netiv Ha’Asara.

The BBC did not report on that incident despite clearly being aware that it had taken place.

One comment on “No BBC coverage of Gaza border shooting incident”