The Community Security Trust (CST) recently published its annual report on the topic of Antisemitic Discourse in Britain for the year 2014. 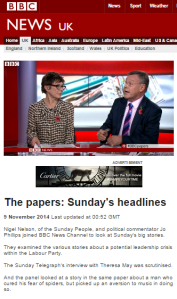 Readers of the report – which can be found in pdf format here – will note a reference to a BBC programme from November 2014 on page 35 under the heading “BBC DISCUSSION – JEWISH DONORS, JEWISH LOBBY, MANSION TAX”.

A link to the broadcast concerned is available here. Discussion of that programme can be found in the BBC Watch article titled “More BBC promotion of the ‘Jewish lobby’ trope” and information regarding the BBC’s response to criticism of the broadcast is available in the subsequent article “BBC doubles down on presenter’s ‘mansion tax’ comment“.