Despite the fact that those killed in the terror attack in Istanbul on March 19th came from Middle Eastern countries, the BBC News website’s article on the subject was not posted on its Middle East page. 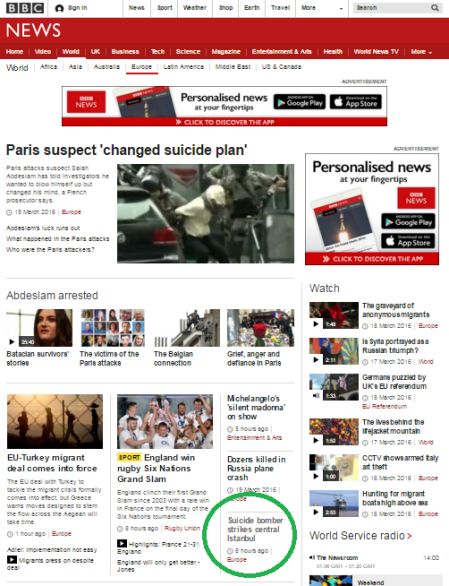 The latest version of the BBC News website’s main report which appeared on its ‘Europe’ page throughout Saturday and most of Sunday – “Istanbul shopping area hit by suicide bomber” – tells readers that two Israelis were murdered in the attack.

“A suicide bomb attack at a busy shopping area in the Turkish city of Istanbul has killed at least four people, officials say.

They include two Israelis with dual US nationality, and an Iranian. Another 36 were injured in the blast near a government building. […]

Eleven Israelis were among the injured. Two Irish citizens, one national each from Germany, Iceland, Dubai and Iran were also injured.”

Curiously, earlier versions of the report were more accurate but were later amended.

“A suicide bomb attack at a busy shopping area in the Turkish city of Istanbul has killed at least four people, officials say.

Three Israelis and an Iranian died, Turkish media reports. Another 36 people were injured in the blast near a government building on Istiklal Street.”

A follow-up report which appeared on the website’s Europe and Middle East pages on the afternoon of March 20th under the title “Turkey blames Islamic State for Istanbul bombing” shows that the BBC knows that three Israelis were murdered in that attack and is also aware of the operation to bring their bodies back to Israel for burial together with the additional eleven wounded Israelis.

“Three Israelis – two with Israeli-US nationality – and an Iranian died in the attack. Another 36 were injured.

Eleven Israelis were among the injured. Two Irish citizens, one national each from Germany, Iceland, Dubai and Iran were also injured.

The coffins of the Israeli nationals were being flown out on Sunday. The Israeli government advised its citizens to avoid Turkey.”

BBC reporting on the ISIS terror attack in Paris last November included personal details of victims and survivors’ stories which – as can be seen in the above screenshot of the March 20th  ‘Europe’ page – were republished following the recent capture of a suspect in connection with that attack.

The name of one of the Israelis murdered in the ISIS attack in Istanbul – Simha Dimri aged 60 from Dimona – was released on the evening of March 19th and the other two victims – Yonathan Suher aged 40 from Tel Aviv and Avraham Goldman aged 69 from Herzliya – were named on the morning of March 20th. Neither of the BBC’s two reports includes any personalising details of the four people killed in that attack.

Compare and contrast: BBC News personalisation of victims of terror