A decade has passed since the publication of the ‘Report of the Independent Panel for the BBC Governors on Impartiality of BBC Coverage of the Israeli-Palestinian Conflict’ – also known as the Thomas Report.

Notwithstanding its many shortcomings, one of the recommendations made in that report called for the use of clear and consistent language.

“We say that the BBC should get the language right. We think they should call terrorist acts “terrorism” because that term is clear and well understood. Equally, on this and other sensitive points of language, once they have decided the best answer they should ensure it is adopted consistently”. […]

“The term “terrorism” should accordingly be used in respect of relevant events since it is the most accurate expression for actions which involve violence against randomly selected civilians with the intention of causing terror for ideological, including political or religious, objectives, whether perpetrated by state or non-state agencies.”

In June 2006 the BBC Governors published their response to the Thomas Report in which that particular recommendation was rejected. At the time a BBC article stated:

“Managers also questioned the use of the word “terrorism” as defined in the independent report, chaired by British Board of Film Classification president Sir Quentin Thomas.

In the report, “terrorism” was described as “the most accurate expression for actions which involve violence against randomly selected civilians with the intention of causing terror”.

Such a definition, executives argued, “would exclude attacks on soldiers” and oblige journalists to make “the very value judgements” they are asked to avoid making under the BBC’s editorial guidelines.”

The topic of “value judgements” still forms a significant part of the BBC’s Guidance on Language when Reporting Terrorism.

“The value judgements frequently implicit in the use of the words “terrorist” or “terrorist group” can create inconsistency in their use or, to audiences, raise doubts about our impartiality. For example, the bombing of a bus in London was carried out by “terrorists”, but the bombing of a bus in Israel was perpetrated by a “suicide bomber”. Or again, “terrorists” in London bombed a tube train, but “insurgents” in Iraq have “assassinated” the Egyptian ambassador. The use of the words can imply judgement where there is no clear consensus about the legitimacy of militant political groups.

Have we assessed the merits of the different perpetrators’ cause, the acts of the different Governments against the perpetrators, or even the value of civilian lives further from home?  We must be careful not to give the impression that we have come to some kind of implicit -and unwarranted – value judgement.

Some will argue that certain events are so evidently acts of terror (and, therefore, perpetrated by “terrorists”) that those descriptions are reasonable, and non-judgemental. However, the language we choose to use in reporting one incident cannot be considered in isolation from our reporting of other stories. So to use the word in incidents which we may consider obvious creates difficulties for less clear-cut incidents. […]

We also need to ask ourselves whether by using “terrorist” we are taking a political position, or certainly one that may be seen as such.”

As we have frequently remarked on these pages, deliberate abstention from use of the word terror is often just as much a ‘value judgement’ and an expression of a “political position” as is its use.

“We can no longer isolate the BBC’s coverage of the UK from how it reports the rest of the world. With global access to our services, the concept of a “primary audience” is problematic: reports made for News 24 are often shared on BBC World; UK bulletins are streamed on the internet; and users of BBC Online can compare the words used on global and UK pages with just a few mouse clicks.

Importantly even within the same bulletin on the same service, there can be issues of inconsistency in how we describe who is doing what to whom. “Militants in Gaza launch a rocket attack: terrorists plant bombs in London…” Don’t assume that what you write or say is confined to a small part of our audience.”

We have frequently documented on these pages the lack of consistency in the BBC’s use – or not – of the word terror (see ‘related articles’ below) and this past week has unfortunately provided several additional examples of the phenomenon.

The BBC News website’s coverage of the June 8th terror attack at Sarona Market in Tel Aviv did not include any use of the word terror and its derivatives by the BBC itself and the word was only seen in direct quotes from Israelis.

A similar approach appears to have been adopted in most of the reporting on the terror attack in Orlando on June 12th with use of the word terror confined to direct quotes – see for example here, here and here. Exceptions were seen in indirect references to terrorism which appeared in written and filmed analysis from the BBC’s security correspondent Gordon Corera and in a ‘Newsbeat’ article headlined “Concerns over UK LGBT venues ‘copycat’ style terror attacks“. 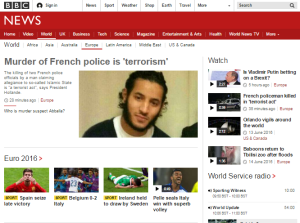 Coverage of the terror attack in France on June 14th also included reports which only used the word terrorism to describe the incident in direct quotes – see for example here, here and here – while other reports made references to the perpetrator’s past links to terrorism. A filmed report by the BBC’s Paris correspondent Lucy Williamson stood out for its refreshing use of accurate terminology.

“This is the man who brought terror to a quiet commuter town.”

An ambiguous approach is also seen in recently produced material concerning the 20th anniversary of the IRA terror attack in Manchester. An article appearing on the BBC News website does clarify what the story is about in its headline – “Manchester IRA bomb: Terror blast remembered 20 years on” – but anyone unfamiliar with the story who read the ‘About The BBC Blog’ post promoted by the corporation on social media would have great difficulty understanding that the “1996 Manchester Bomb” was a terror attack committed by the IRA.

As we see once again, the BBC not only has difficulty in achieving consistency – and therefore impartiality – in its reporting of terrorism in assorted locations, but even in different reports about the same incident.

Ten years have passed since the BBC chose to ignore the Thomas Report’s call to “get the language right”. As the past week has shown once again, that decision does not serve the corporation’s funding public by helping them understand international and domestic events and it certainly has not enhanced the BBC’s reputation as an impartial broadcaster.

Mapping the BBC’s inconsistent use of the word ‘terror’

The BBC, terrorism and ‘consistency’