On October 14th the BBC News website published an article on its Middle East page about reactions to the text of the document approved by UNESCO’s executive committee the previous day.

Titled “Israel freezes Unesco ties for ‘denying Jewish holy sites’“, the report commendably avoids inaccuracies which have previously been seen in BBC reporting on the subject of Temple Mount and the Western Wall by using correct terminology and providing an accurate portrayal of the significance of Temple Mount to Jews. 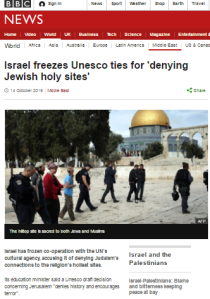 “It comes after the body approved a text which repeatedly used only the Islamic name for a hilltop complex which is also the holiest site in Judaism.

The site is known to Jews as the Temple Mount and Haram al-Sharif to Muslims.”

However, the fact that BBC audiences have not been informed of prior attempts to pass a similar document at UNESCO or of previous decisions taken at that body concerning other historic sites means that readers of this report lack the background information necessary to understand the story fully and the relevance of the word ‘another’ in one of the quotes used.

“Israeli Prime Minister Benjamin Netanyahu said in a Facebook post that Unesco had become a “theatre of the absurd” in taking “another delusional decision”.”

Without being provided with the relevant context of Palestinian terrorism and rioting on Temple Mount, readers are told that:

“The stated aim of the text was “the safeguarding of the cultural heritage of Palestine and the distinctive character of East Jerusalem”.

It repeatedly denounced Israeli actions, including the use of force, imposition of restrictions on Muslim worshippers and archaeological work. Israel regards such criticism as politically motivated.”

BBC audiences have also been serially deprived of the background information which would enable their understanding of the role of this document in the long-standing Palestinian campaign to erase Jewish heritage and history as part of the tactical delegitimisation of Israel. The article closes with an anodyne quote from a PA spokesman:

“”This is an important message to Israel that it must end its occupation and recognise the Palestinian state and Jerusalem as its capital with its sacred Muslim and Christian sites,” said Nabil Abu Rdainah, a spokesman for Palestinian President Mahmoud Abbas.”

Readers are not however informed of the reaction of Mahmoud Abbas’ own party, as reported by Ynet:

“Fatah, the ruling party in the Palestinian Authority, welcomed on Thursday a UNESCO resolution which fails to acknowledge Jewish ties to the Temple Mount.

“This decision is an important victory for the Palestinian people, the protectors of al-Aqsa, and in terms of national defense,” a Palestinian spokesperson said.

A Fatah press release said that the importance of the decision lies in its content, specifically that it denies any historical connection between Jews and Jerusalem and the Temple Mount.” [emphasis added]

Back in January the BBC’s UN correspondent told listeners to BBC World Service radio that:

Had BBC audiences been provided in the past with the information and context which would enable their understanding of this latest example of abuse of the UN forum for anti-Israel campaigning, they would of course be able to appreciate why Israelis take that view.