Following the terror attack at the Kehilat Ya’akov Synagogue in the Har Nof neighbourhood of Jerusalem on November 18th 2014, the BBC News website produced a profile of the organisation with which the two terrorists were affiliated. 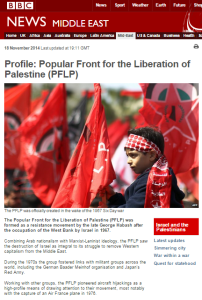 Two years later, that profile remains online with its inaccurate main illustrative photograph. The article’s presentation of the number of Israelis murdered in the Har Nof attack is also inaccurate: [emphasis added]

“It was also not clear how involved the PFLP leadership had been in the attack in November 2014 that saw two members of the group armed with axes storm a synagogue complex in West Jerusalem and kill four rabbis in the middle of their morning prayers.

A statement by the Abu Ali Mustafa Brigades praised the “heroic operation” by Ghassan and Uday Abu Jamal, but did not specify whether the cousins had been instructed to carry out the attack.”

In fact, five people (four worshippers and a policeman) were killed during the attack and one additional victim succumbed to his wounds a year later but the BBC’s article has not been updated accordingly.

The article refrains from describing the PFLP as a terrorist organisation in the BBC’s own words, with that definition attributed to Israeli authorities in quotation marks:

Readers of the profile are not informed that the PFLP is defined as a proscribed terror organisation by the United States, Canada, Israel and the EU.

“Many European countries fund a network of organizations, some of which are directly affiliated with the PFLP, and others with a substantial presence of employees and officials linked to the PFLP. The non-governmental organizations (NGOs) include Addameer, Al-Haq, Alternative Information Center (AIC), Defense for Children International – Palestine (DCI-P), Health Work Committee (HWC), Stop the Wall, Palestinian Center for Human Rights (PCHR), and the Union of Agricultural Work Committees (UAWC). […]

Donors to the NGOs include the EU, the governments of Sweden, Denmark, Spain, Norway, Ireland, UK, Netherland, Germany, Belgium, France, and Switzerland, and the United Nations. Continued funding raises serious questions about due diligence and evaluation on the part of the governments and the UN, as well as compliance with domestic and international laws.”

Some of those NGOs have been directly or indirectly quoted and promoted by the BBC in its Middle East coverage – for example Addameer, Al Haq, Defence for Children International – Palestine and of course the PCHR, which received particularly extensive exposure during the 2014 conflict between Israel and terror organisations in the Gaza Strip and which was one of the sources behind the casualty figures amplified by the BBC at the time.