Readers may recall that back in November 2012 the BBC News website published a very one-sided account of the sentencing of anti-Israel activist Bassem Tamimi which included extensive amplification of content from a press release put out by the political NGO Amnesty International and – as noted here at the time – was illustrated with a staged image of Tamimi’s daughter. 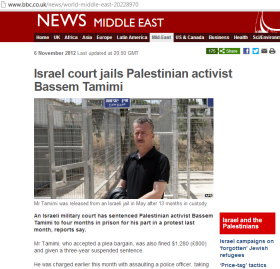 Nearly three years after that BBC article appeared, Bassem Tamimi went on a speaking tour in the US which included a controversial event at a school. The ‘Legal Insurrection’ website continues the story:

Based on documents produced pursuant to a NY Freedom of Information Law (FOIL) request and court rulings, previously we were able to document that the Tamimi event was an anti-Israel propaganda event. At least one third-grade student suffered nightmares and a Letter of Reprimand was issued to the school principal for attempting to cover-up the nature of the event.

After over a year of investigation and litigation, including a court order under the NY Freedom of Information Law, Legal Insurrection has obtained a partial video of the Tamimi Event. That partial video shows how, after the main portion of the presentation was over (for which there is almost no video), the third-grade students expressed strong hostility to Israel and were encouraged to do so.”

The rest of the article and the videos can be found here.