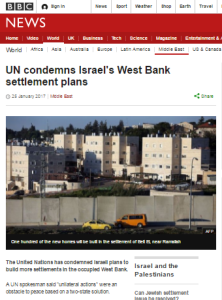 “The United Nations has condemned Israeli plans to build more settlements in the occupied West Bank.

A UN spokesman said “unilateral actions” were an obstacle to peace based on a two-state solution. […]

“In this respect any unilateral decision that can be an obstacle to the two-state goal is of grave concern for the secretary general.

“There is a need for the two parties to engage in a bona fide negotiation to reach the goal of two states, Israel and Palestine, two states for two people.””

Readers also got the take of the Palestinian Authority:

“Palestinian officials said the plans undermined peace hopes by building on land they want for a future state.”

As well as that of the PLO:

“Once again, the Israeli government has proved that it is more committed to land theft and colonialism than to the two-state solution and the requirements for peace and stability,” she said in a statement.

“Such a deliberate escalation of Israel’s illegal settlement enterprise constitutes a war crime and the flagrant violation of international law and conventions, in particular UN Security Council resolution 2334.”

Ms Ashrawi called on the US and the rest of the international community to “undertake serious and concrete measures to bring about a full cessation of all settlement activities and to hold Israel to account for these disastrous plans with punitive measures and sanctions before it completes the destruction of the territorial and demographic contiguity of the West Bank”.”

A further 173 words related to the new US administration and of course no article concerning Israeli building permits would be complete without the obliteration of pre-1967 history and the BBC’s standard partial mantra on ‘international law’.

“About 500,000 Jews live in about 140 settlements built since Israel’s 1967 occupation of the West Bank and East Jerusalem.

The settlements are considered illegal under international law, although Israel disputes this.”

In contrast, the article devoted just 81 words to telling readers what the story is actually about and only in the thirteenth paragraph did they discover that most of the approved plans are located in “existing West Bank settlement blocs”.

Most of the new homes approved on Tuesday will be built in existing West Bank settlement blocs, including 902 in Ariel and 652 in Givat Zeev.

One hundred will be constructed in Beit El, a settlement near Ramallah that reportedly has received funding from a foundation run by the family of Mr Trump’s son-in-law and senior adviser, Jared Kushner.”

Not surprisingly, the BBC chose not to tell its audiences about another part of the announcement.

“Liberman also said he would request permission from the cabinet for the construction of a Palestinian industrial park in Tarkumiya, northwest of Hebron.

“It will be one of the largest industrial zones in the West Bank, in which we are planning to set up warehouse and fuel storage infrastructure, along with other elements,” Liberman’s office said in a statement.”

BBC audiences were not, however, provided with context crucial to their proper understanding of this story in general and the generously amplified comments from the UN and from the PA and the PLO in particular.

They were not told that under the terms of the Oslo Accords Israel has full control over Area C and that the agreements – signed willingly by the Palestinians – place no ban or restriction on construction in the Israeli communities located in that area. Neither were they told that the future of Area C is, according to those agreements, to be determined in final status negotiations. And as usual, even though the BBC knows it full well, they were not informed that the main “settlement blocs” such as Ariel and its surrounding area would be likely to remain under Israeli control in the event of a peace agreement in exchange for land swaps.

It is patently obvious that the BBC is not even trying to give the impression of adhering to its professed editorial standards of ‘due impartiality’ when reporting on Israeli planning permissions.