Embedded in that article are two filmed reports by Tom Bateman and Yolande Knell and a link to another article promoting anti-Israel theatricals and amplifying the PA/PLO’s politicised messaging on the Balfour Declaration – all of which also appeared separately on the same webpage. 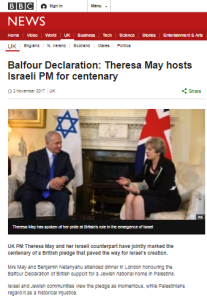 Comparatively little of this article relates to the subject matter described in its headline but almost 30% of its 538 words (not including the insert of analysis from the BBC’s diplomatic correspondent) are devoted to promotion of the PA/PLO chosen narrative (along with references to “their land”) including – once again – a link to an op-ed by Mahmoud Abbas that appeared in the Guardian.

“…Palestinians regard it as a historical injustice. […]

In the Palestinian territories, thousands of Palestinians held protest marches in the West Bank, Gaza and East Jerusalem, denouncing what they say is a betrayal which left them dispossessed.

Palestinians regard the Balfour Declaration as having robbed them of their land and have demanded that Britain apologises.

Some held black flags and called for Palestinian refugees to be allowed to return to land which became Israel.

About 400 protesters from a fringe group of Jewish anti-Zionists marched from Downing Street to the Houses of Parliament, calling on “God to dismantle the Israeli State”. […]

However, Palestinian President Mahmoud Abbas said the Balfour Declaration was “not something to be celebrated”.

Writing in the Guardian, Mr Abbas said the past was still “something that can be made right”, and called on the UK to recognise a Palestinian state in territory occupied by Israel since the 1967 Middle East war, with East Jerusalem as its capital.”

As has been the case in all the recent BBC coverage of the Balfour Declaration centenary, portrayal of the document itself erased from audience view the part safeguarding “the rights and political status enjoyed by Jews in any other country” and no mention was made of the expulsion of ancient Jewish communities from Arab and Muslim lands.

“Britain’s pledge, on 2 November 1917, was made in a letter by the then-Foreign Secretary Arthur Balfour to Lord Walter Rothschild, a leader of the British Jewish community.

The letter said the government viewed “with favour the establishment in Palestine of a national home for the Jewish people”, so long as it did not “prejudice the civil and religious rights of existing non-Jewish communities”.”

The article failed to adequately clarify that the Mandate for Palestine was issued by the League of Nations and that Britain was selected to administrate that mandate on its behalf.

“The Balfour Declaration was the first international recognition by a world power of the right of the Jewish people to a national home in their ancestral land and formed the basis of Britain’s Mandate for Palestine in 1920.”

Once again, the fact that the armed forces of five Arab countries invaded Israel the day after independence was declared was airbrushed from the BBC’s account, as was the fact that a considerable number of the Palestinian Arabs who left their homes around that time did so at the advice of Arab leaders.

“The British Mandate terminated on 14 May 1948 and the Jewish leadership in Palestine declared an independent Israeli state. In the Arab-Israeli war that followed, hundreds of thousands of Palestinian Arabs fled or were forced from their homes.”

The above-mentioned insert of analysis from Jonathan Marcus encouraged readers to believe that there are two “competing narratives” concerning the Balfour Declaration (while of course ‘impartially’ refraining from discussing their validity) but avoided the topic of the Palestinian Authority’s long-standing politicisation of that document.

“Much of the current focus on the Balfour Declaration is due to the fact that it supports the competing narratives of the Israeli government and the Palestinian leadership.

For the Israelis it highlights the legitimacy of the Jewish national enterprise, while for Palestinians, it underscores the role of the major powers in helping to create Israel, while – in their view – the legitimate Palestinian aspirations to statehood were ignored or side-lined.

Thus both sides have a very different interpretation of the declaration’s significance – one that serves today’s arguments about one of the region’s longest unresolved struggles.”

As we see from this report and others, BBC coverage of the Balfour Declaration centenary has conformed to a standard formula focusing on unquestioning amplification of PA/PLO messaging while completely erasing the part of the document relating to “the rights and political status enjoyed by Jews in any other country” and the topic of Jewish refugees from Arab lands.