Readers may recall that in an edition of the Radio 4 programme ‘PM’ broadcast back in June, the BBC’s Hugh Sykes portrayed the 1947 Partition Plan as follows: 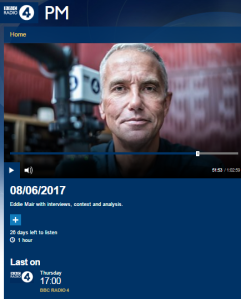 “And 70 years ago in 1947, the UN General Assembly passed the partition resolution, recommending the creation of independent Arab and Jewish states with economic union and an international regime for a shared Jerusalem. The two-state resolution 181 seventy years ago was rejected by Palestinians and by most Jewish organisations.” [emphasis added]

As was noted here at the time:

“The Palestinians – in the form of the Arab Higher Committee – did indeed reject the Partition Plan outright – but so did the Arab states; unmentioned by Sykes. While some groups such as Etzel and Lehi expressed opposition to the Partition Plan, the organisation officially representing Jews in Palestine – the Jewish Agency – both lobbied for and accepted it. Sykes’ attempt to portray the plan as having been rejected by both Arabs and Jews is egregiously inaccurate, although unfortunately not unprecedented in BBC content.”

BBC Watch submitted a complaint on that issue that was acknowledged on June 13th. Ten days later we received a reply from BBC Complaints stating:

“Thanks for contacting us about ‘PM’ on June 8.

We realise you were concerned about the item on the significant anniversaries in the Middle East this year. It’s clear you felt there was an error which required correction.

You’ve stated that the Jewish Agency was the official voice of the Jews in Palestine at the time, and that it was therefore incorrect and misleading to say ‘most Jewish organisations’ rejected the Two State resolution in 1947.

We raised this with the programme team and with Hugh Sykes. Hugh explains:

“My ‘most’ was intended to embrace the hugely significant, influential and powerful Jewish organisations like Hagganah and the Stern Gang who rejected the partition plan, so I think ‘most’ was a fair distillation of the balance between the organisations (not necessarily the Jewish people) who accepted or rejected UN res 181.”

So the statement was not that the organisations opposed to the resolution were official; he was highlighting the fact that there was a significant and powerful opposition.

We hope this clarifies the issue and explains why we are satisfied with its accuracy for listeners.”

BBC Watch submitted a second complaint in light of that response:

“The response to my previous complaint is unsatisfactory. Not only does it inaccurately claim that the Haganah opposed the Partition Plan but it also claims that Lehi (referred to by Sykes using the pejorative title ‘Stern Gang’) was “hugely significant, influential and powerful” when in fact that group never had more than a few hundred members and was rejected by the mainstream Jewish population.

Most importantly, however, this response does not address the body of my complaint. Sykes’ claim that “The two-state resolution 181 seventy years ago was rejected by Palestinians and by most Jewish organisations” inaccurately leads listeners to believe that the plan was rejected by Jews and Arabs alike and therefore materially misleads audiences with regard to a significant historic event. In fact, while two small Jewish organisations (not “most”) – Etzel and Lehi – expressed reservations regarding the Partition Plan, the mainstream Jewish establishment both lobbied vigorously for it and accepted it. A correction needs to be issued – including on the webpage still available to audiences – clarifying that the Partition Plan was not rejected by Jews at all.”

On July 20th we received a reply to the second complaint:

“Thank you for taking the time to contact us and we appreciate that you felt strongly enough to write to us again. We’re sorry to learn that you were not satisfied with our earlier response.

We’ve noted your points but do not consider they have suggested a possible breach of the BBC’s standards to justify further investigation or a more detailed reply. Opinions can vary widely about the BBC’s output, but may not necessarily imply a breach of our standards or public service obligations.

For this reason we do not feel we can add more to our reply or answer further questions or points. We realise you may be disappointed but have explained why we are not able to take your complaint further.”

BBC Watch then submitted a Stage 2 complaint to the BBC’s Executive Complaints Unit (ECU) and received a reply on September 19th informing us of the ECU’s decision to consider it as an editorial complaint.

On November 10th – over five months after the programme was originally broadcast – we were informed by the Head of Executive Complaints that the ECU had upheld our complaint. 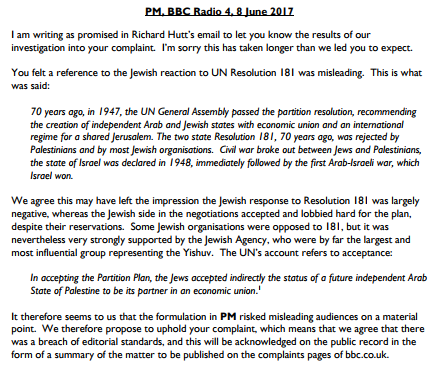 Of course the vast majority of people who listened to ‘PM’ on June 8th will be highly unlikely to search out the relevant page on the BBC website on the off-chance that a correction may have been made to something they heard over five months ago.

And so, the BBC’s partly outsourced complaints system (which one could be forgiven for thinking is primarily designed to make members of the public give up and go away) continues to do a disservice to licence fee payers by ensuring that by the time a material inaccuracy is addressed, virtually no-one will receive the corrected information.