A journalist known for his promotion of the notion of a secretive ‘pro-Israel lobby’ allegedly influencing British politics who regularly writes for one media outlet linked to Hamas and participated in a Balfour Declaration/Israel bashing ‘conference’ organised by another outfit with Hamas connections might not seem like the ideal presenter for an item discussing the Balfour Declaration centenary aired by a broadcaster supposedly committed to ‘impartiality’.

Nevertheless, Peter Oborne did present the October 28th edition of BBC Radio 4’s ‘The Week in Westminster’ and that programme included (from 22:03 here) “reflections on the letter which paved the way for the creation of the state of Israel, 100 years ago”. 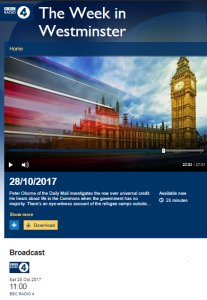 One of the other people ‘reflecting’ was MP Stephen Kinnock who last December accepted an award from the Hamas-linked ‘Palestinian Return Centre’ as thanks for his support during its campaign for UN accreditation. Mr Kinnock’s views on Israel have long been clear: shortly after the conflict of summer 2014, for example, he wrote the following:

“This devastating onslaught on Gaza has triggered yet another humanitarian crisis, and that’s what’s creating headlines in the here and now. But it is also possible that it has inflicted such damage on Gaza’s already crippled infrastructure that it will become an unliveable place well before 2020. You just can’t help wondering whether the Israeli government factored this into its calculations when it opted to launch such a wide-ranging attack on the Gaza Strip.” [emphasis added]

Kinnock is also on record as an enthusiastic supporter of the anti-Israel Boycott, Divestment and Sanctions (BDS) campaign but Radio 4 listeners were not informed of that fact before they heard him promote it in this item – introduced by Peter Oborne as follows:

Oborne: “Parliament did note one other momentous event last week: the centenary of the famous letter from foreign secretary AJ Balfour in 1917 which paved the way for the creation of the State of Israel. A hundred years on and this declaration is as contentious as ever. Tory MP Robert Halfon and Labour’s Stephen Kinnock took part in this week’s debate and afterwards they came into the studio. How does Robert Halfon view the centenary?”

Halfon: “Well I thought it was an incredibly important moment in British history as well as in terms of the creation of the State of Israel. I thought it was another example of why Britain is a truly great country. The Jewish people should have a homeland and had a right to return to their homeland and it was an incredible moment both – as I say – in the history of the Jewish people but also in the history of our country.”

Unsurprisingly, Kinnock’s response reflected PLO messaging on the topic of the Balfour Declaration – although in contrast to much other BBC coverage of the centenary (see ‘related articles’ below), listeners did at least get to hear an accurate portrayal of the text’s reference to “civil and religious rights”. However, Kinnock’s promotion of context-free, spurious and misleading linkage between the text of the Balfour Declaration and what he described as ‘violations’ – including the unsupported notion of ‘illegal’ trade – predictably went completely unchallenged by Oborne.

Kinnock: “Well, I think it’s very important as well to remember the crucial phrase in the Balfour Declaration: ‘it being clearly understood that nothing shall be done which may prejudice the civil and religious rights of existing non-Jewish communities in Palestine’ and..err…I think the conclusion we have to draw is that that sentiment has simply not held and has been repeatedly violated by Israeli governments down the ages. We now see vast expansion of illegal settlements, violations of human rights, businesses trading illegally out of the occupied territories of the West Bank and all that is undermining peace and undermining security. We know that we can’t have one without the other so my intervention in the debate was very much in the hope that we could see a change in attitude and behaviour from the Israeli side, which I think is the key to any kind of forward progress in this.” [emphasis added]

Halfon: “If you originally remember, when Palestine, which had the British mandate, was carved up the vast majority of it became Jordan: 77% of it. The rest – smaller, much more small part of that; smaller than the size of Wales – was given to the Jewish people. The Arabs refused to accept that in 1948. We had the war in 1948, we had the Six Day War, the Yom Kippur War. Israel has faced the threat of terrorism almost every day since its existence and despite that, is a democracy, has been prepared to make significant moves towards peace. It should be a place that should be celebrated and supported by the United Kingdom and anyone who believes in freedom and democracy.”

Kinnock: “I think all the Palestinian people are asking for is to be treated equally in the eyes of the law.”

Oborne: “Would you like a change in British government policy – a different kind of pressure on Israel if you come to power?”

Listeners then got to hear what may be a preview of the policy of a government under Mr Kinnock’s party. They were not however provided with any background information concerning the goals of the BDS campaign promoted by Kinnock and his factually baseless references to Judea & Samaria as “illegally occupied” were not challenged by Oborne.

Kinnock: “Yeah. I think what certainly one of the things we must do is contribute to the campaign for any business that is located in the illegally occupied West Bank to be sanctioned; that British companies should not do any trade with those businesses and this also means indirectly; through – for example – financial institutions. There’s quite a lot of British money going into financing a lot of commercial activity going on in the illegally occupied West Bank. So I think that would be a very good start.”

Halfon: “The settlement issue; all those things will come under a negotiation of a proper peace process but there should be a Palestinian state – something I believe in – but the Israelis are right to say we want a Palestinian state but we also need to be sure that we will be free from terrorism and attacks from Islamist groups, from Hamas and so on.”

Oborne: “Anyway, let me wrap things up, gentlemen, by drawing attention to the fact that the 2nd of November will be the 100th anniversary of the Balfour Declaration. I’ll ask each of you in turn whether you agree with the prime minister that this is a matter for celebration. Robert Halfon.”

Halfon: “Absolutely. I think it’s a very special moment that should be celebrated.”

Kinnock: “No. I think it’s a matter of regret because the phrase in there which is absolutely critical that the interests of non-Jewish communities will be protected has been violated countless times.”

No-one familiar with the views of Peter Oborne and Stephen Kinnock would have expected to hear an accurate and impartial discussion of either the Balfour Declaration centenary or Israel in this item. The problem, however, is that Radio 4 listeners were not made aware of the “particular viewpoint” of the contributors as BBC editorial guidelines on impartiality require.

BBC contributor on ME links up with UK Hamas supporters