One day after publishing a report amplifying condemnation of a statement that has not yet been made, the BBC News website put out another article in the same style on December 5th.

Originally titled “Jerusalem: New warnings over US shift on city status”, like its predecessor this report was promoted on the website’s main home page as well as its ‘World’ and ‘Middle East’ pages. Several hours after publication, the article underwent considerable amendment and its headline was changed to read “Jerusalem: Turkey warns Trump against crossing ‘red line’“. 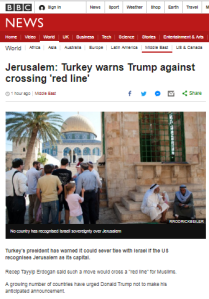 Once again, the report opened with amplification of statements relating to an announcement that, at the time of its publication, had not even been issued.

“Turkey’s president has warned it could sever ties with Israel if the US recognises Jerusalem as its capital.

Recep Tayyip Erdogan said such a move would cross a “red line” for Muslims. […]

“Mr Trump! Jerusalem is a red line for Muslims,” Mr Erdogan said in a televised speech on Tuesday.

“We could go as far as cutting diplomatic ties with Israel over the issue.”

As has been the case in many previous BBC reports concerning the US embassy in Israel published over the past year, audiences were not informed of the existence of the US’s ‘Jerusalem Embassy Act of 1995’ and the related (and often misrepresented) bi-annual waivers signed by a succession of US presidents. Neither were readers told that the current US president is by no means the first to have proposed “moving the US embassy” and that both Bill Clinton and George W Bush made the same campaign pledge.

“Donald Trump missed a deadline on Monday to sign a waiver which would postpone moving the US embassy from Tel Aviv to Jerusalem, a campaign pledge he has delayed fulfilling.”

Under the sub-heading “What is so contentious about Jerusalem’s status?” readers were told that:

“The status of Jerusalem goes to the heart of Israel’s conflict with the Palestinians, who are backed by the rest of the Arab and wider Islamic world.

The city is home to key religious sites sacred to Judaism, Islam and Christianity, especially in East Jerusalem.

Israel occupied the sector, previously occupied by Jordan, in the 1967 Middle East war and regards the entire city as its indivisible capital.

The Palestinians claim East Jerusalem as the capital of a future state, and according to 1993 Israel-Palestinian peace accords, its final status is meant to be discussed in the latter stages of peace talks.

Israeli sovereignty over Jerusalem has never been recognised internationally, and all countries, including Israel’s closest ally the US, maintain their embassies in Tel Aviv.” [emphasis added]

While that brief reference to the Jordanian occupation of Jerusalem is unusual in BBC content, the context to that – which includes the fact that Jerusalem is included in the territory assigned by the League of Nations for the creation of a Jewish homeland – was not provided.

The reference to “key religious sites”, which of course include Temple Mount, as being in “East Jerusalem” – and hence by implication in what the BBC presents as ‘occupied territory’ – was reinforced by the inclusion in this article of a map which, despite having been produced by the politically partisan NGO B’tselem, is now frequently seen in BBC content.

The article continued with a no less politically partisan portrayal of certain Jerusalem neighbourhoods that of course include the ancient Jewish quarter in the Old City and districts such as Neve Ya’akov where Jews purchased land long before the Jordanian invasion in 1948.

“Since 1967, Israel has built a dozen settlements, home to about 200,000 Jews, in East Jerusalem. These are considered illegal under international law, though Israel disputes this.

If the US recognises Jerusalem as Israel’s capital, it will put it out-of-step with the rest of the international community and reinforce Israel’s position that settlements in the east are valid Israeli communities.”

It is once again all too apparent that the BBC has chosen to exclusively promote a politically partisan narrative in its coverage of this issue and readers of this report and its predecessor did not hear even one voice that dissents from that narrative. Instead, the BBC’s framing of this story is based on unquestioning amplification of very thinly veiled threats of violence from the Palestinians and their supporters as well as completely unchallenged claims that the opening of a US embassy in Jerusalem would “destroy” the (non-existent) “peace process”.

BBC continues to amplify a political narrative on Jerusalem

26 comments on “The BBC’s partisan portrayal of Jerusalem persists”