In recent days the BBC News website published two reports concerning campaigns at the UN directed against the US’s recognition of Jerusalem as Israel’s capital as announced two weeks ago.

On December 18th the website published a 533 word report titled “Jerusalem: US vetoes UN resolution rejecting Trump’s declaration“. Fifty-six of those words were used to promote the theme that the US announcement has caused Palestinian violence. Explanation of the motion presented to the UN Security Council by Egypt (including a link) was provided in 137 words and Palestinian reactions to the US veto were given 61 words of coverage. Remarks made by the US Ambassador to the UN got just 70 words of coverage and BBC audiences were not informed of the points raised in Ms Haley’s explanation of why the US vetoed the draft resolution.

Some minimal background information on Jerusalem was presented to readers in 104 words – mostly recycled from previous BBC articles in recent weeks. 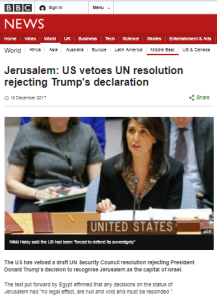 “The status of Jerusalem goes to the heart of Israel’s conflict with the Palestinians.

Israel occupied the east of the city, previously occupied by Jordan, in the 1967 Middle East war and regards the entire city as its indivisible capital.

The Palestinians claim East Jerusalem as the capital of a future state and its final status is meant to be discussed in the latter stages of peace talks.

Israeli sovereignty over Jerusalem has never been recognised internationally, and all countries currently maintain their embassies in Tel Aviv. However, President Trump has told the US state department to start work on moving the US embassy.”

Seeing as the BBC chose to provide readers with a link to the text of the Egyptian draft resolution and given that the document states that the motion reaffirms “the inadmissibility of the acquisition of territory by force”, one might have thought that the BBC would have put more effort into explaining how “the east” of Jerusalem came to be “previously occupied by Jordan” and the significance of that fact.

The article also includes a map of Jerusalem produced by the partisan political NGO B’tselem which – among other things – portrays the Jewish Quarter in the Old City as an “Israeli settlement”.

On December 20th the BBC News website published a report headlined “UN Jerusalem vote: US ‘will be taking names’” which relates to the next upcoming stage of actions against the US announcement concerning Jerusalem. 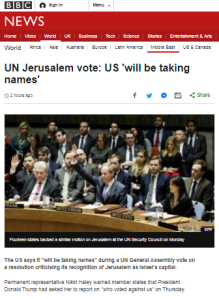 “The US says it “will be taking names” during a UN General Assembly vote on a resolution criticising its recognition of Jerusalem as Israel’s capital.

Permanent representative Nikki Haley warned member states that President Donald Trump had asked her to report on “who voted against us” on Thursday.

The draft resolution does not mention the US, but says any decisions on Jerusalem should be cancelled.

On Monday, the US vetoed a similar motion at the UN Security Council.”

The article promotes the exact same context-lite background concerning Jerusalem seen in the previous report. It also includes – yet again – the same map of Jerusalem produced by B’tselem. 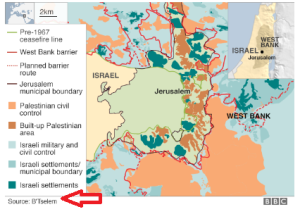 Between December 4th and December 20th visitors to the BBC News website were shown the partisan maps of Jerusalem produced by UNOCHA and/or B’tselem in no fewer than eleven reports including the two above. 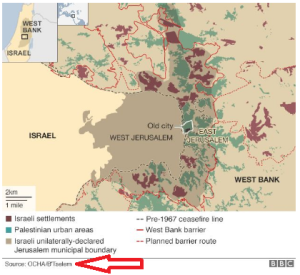 Both B’tselem and UNOCHA are active in political campaigning against Israel.

“In 2016 alone, OCHA-oPt requested $571 million from international donors towards various causes. Among other things, the money was designated for highly biased NGOs, including: Islamic Relief Worldwide, which, in June 2014, was outlawed by Israel for its alleged role in funneling money to Hamas (a designated terror organization by Israel, the U.S., EU and Canada); the Palestinian Center for Human Rights, a leader of anti-Israel “lawfare” campaigns used to demonize Israel and harass Israeli officials; and the pro-BDS Ma’an Development Center.

UN OCHA also manages “Thematic Clusters” – for biased, political, radical NGOs to manipulate and circulate unconfirmed, false, and distorted statistics to the UN and media. For example, during the 2014 Gaza war, the OCHA “Protection Cluster” designated Palestinian Center for Human Rights, Al Mezan, and B’Tselem, to provide “data” regarding casualty statistics. These NGOs, which lack credible methodologies for analysis of casualty claims, appear to have been repeating information originating with Hamas officials in Gaza.”

How the BBC – committed as it is to the provision of “accurate and impartial” reporting to its audiences – thinks it can justify its serial promotion of one-sided maps produced by partisan NGOs that advance a blatant anti-Israel agenda remains unclear.