Between December 19th 2017 and January 17th 2018 the BBC promoted at least three written reports, one filmed report and three radio reports (see ‘related articles’ below) on the topic of the arrest of Ahed Tamimi. 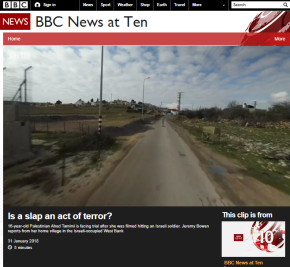 Viewers of BBC One’s ‘News at Ten’ (also aired on the BBC News Channel) saw a report that has also been promoted on the programme’s webpage and on social media under the title “Is a slap an act of terror?” using the following description:

“16-year-old Palestinian Ahed Tamimi is facing trial after she was filmed hitting an Israeli soldier. Jeremy Bowen reports from her home village in the Israeli-occupied West Bank”

The BBC News website promoted a filmed report titled “Ahed Tamimi: Was Palestinian teenager’s ‘slap’ terrorism?” on its main home page, its ‘World’ page and its ‘Middle East’ page, the synopsis to which reads:

“Teenage Palestinian activist Ahed Tamimi and her mother, Nariman, are due to go on trial, charged with security offences.

They were arrested after a video Nariman Tamimi filmed of her daughter slapping an Israeli soldier went viral.

Why is their village, Nabi Saleh, a ‘microcosm of the conflict’? The BBC’s Middle East editor Jeremy Bowen explains.”

Clearly both those headlines and presentations suggest to BBC audiences that Ahed Tamimi has been charged with terrorism following her assault of a soldier – but that disingenuous implication is false.

The twelve charges against Ahed Tamimi do however include one count of incitement that relates to a video put out by her mother on social media in which Ahed Tamimi’s “message to the world” – as it was described by her mother – was:

“Whether it is stabbings or suicide bombings or throwing stones, everyone must do his part and we must unite in order for our message to be heard that we want to liberate Palestine”

The BBC knows about that charge and has mentioned it in two previously aired radio reports.

“Maurice Hirsch used to be the IDF chief prosecutor for the West Bank. He says the more serious charges against Ahed involved her alleged online call for more action to support the Palestinian cause – from protests to what she calls martyrdom operations. […]

[Hirsch]: One of the main counts of the indictment is really incitement – publicly calling for others to commit other terrorist attacks.” Yolande Knell, BBC Radio 4, 8/1/18

Jeremy Bowen, however, chose to conceal Tamimi’s statement calling for violence – and the resulting charge – from viewers of both his filmed reports.

In the ‘News at Ten’ report, Bowen further promoted the red herring falsehood that Ahed Tamimi’s story is one about terrorism charges in his introduction.

Bowen: “Any peace in Nabi Saleh on a cold winter day is an illusion. It’s a small Palestinian village on the West Bank: a sharp thorn in the side of its occupier – Israel. The people here refuse to give in to Israel’s overwhelming power. For some Israelis that makes them terrorists.”

In the BBC News website report viewers are likewise told that Nabi Saleh is an “occupied village” by Ahed Tamimi’s father. BBC audiences were not told in either report that the village is in Area B and therefore under Palestinian Authority administration while Israel is responsible for security. Neither are they told that the soldier assaulted by Tamimi was located at the entrance to her family home at the time because villagers had been throwing rocks at soldiers and at a nearby road.

While that relevant context is omitted from both reports, Bowen did tell ‘News at Ten’ viewers that Ahed Tamimi:

“…told two Israeli soldiers to get off her family’s property. She’d just heard – wrongly – that [her cousin] Mohammed had died.”

Failing to explain why Palestinians are tried in military courts (and that such a situation is in fact a requirement of the Geneva Conventions) Bowen also inaccurately implied to ‘News at Ten’ audiences that those courts lack due process.

“Like all West Bank Palestinians, Ahed Tamimi is being tried in a military court which usually convicts.”

In both his reports the BBC’s Middle East editor chose to showcase one of Israel’s most controversial Knesset members, Oren Hazan, who unfortunately played right into his seasoned interviewer’s hands by claiming that “a slap is terrorism” in response to a question from Bowen.

And thus Jeremy Bowen managed to produce two widely promoted reports that not only divert audience attention away from the core issue in the story of Ahed Tamimi’s arrest and indictment by disingenuously concealing its real background but also intentionally diminish – and indeed trivialise – the terror threat with which Israel deals on a day-to-day basis.