As readers are probably aware, an Iranian UAV infiltrated Israeli air-space early on the morning of February 10th, triggering a series of events that were initially reported on the BBC News website under the headline “Israeli jet downed by Syrian fire – army” – even though the investigation into the circumstances under which the crew had to evacuate their plane is still ongoing.

The BBC subsequently changed that headline to “Syria war: Israeli fighter jet crashes under Syria fire, military says” – once again erroneously suggesting that the events were linked to the civil war in Syria. In the sixth version of the report, the BBC added a qualification:

“It was not clear whether the F-16 jet was hit by anti-aircraft fire or went down for other reasons.”

The final version of the report was re-titled “Syria shoots down Israeli warplane as conflict escalates“.

In other words, the headlines of all thirteen versions of this report confused cause and effect by informing BBC audiences that the story was about an Israeli plane crashing rather than the infiltration of Israeli air-space by an Iranian drone.

In the final version of the BBC’s report the first reference to the first and second occurrences in that sequence of events – the UAV infiltration into Israel and its interception by an Israeli air force helicopter – came only in its third paragraph.

“The plane was hit during air strikes in response to an Iranian drone launch into Israeli territory, Israel says.

The drone was shot down.”

Later on readers were told that:

“The Israeli military says a “combat helicopter successfully intercepted an Iranian UAV [unmanned aerial vehicle] that was launched from Syria and infiltrated Israel”.

It tweeted footage which it says shows the drone flying into Israeli territory before being hit.” [emphasis added] 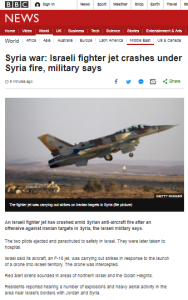 However, the BBC – which, notably, recently took it upon itself to launch “a new scheme to help young people identify real news and filter out fake or false information” – had no qualms about amplifying Iranian disinformation.

“Meanwhile Iran and the Tehran-backed Hezbollah movement in Lebanon – which are allied with the Syrian government – dismissed reports that an Iranian drone had entered Israeli airspace as a “lie”.”

The third event to take place on the morning of February 10th was an IAF strike on the mobile command vehicle that launched and guided the Iranian UAV at the T4 airbase near Tadmor in central Syria. The BBC reported that event as follows:

“The drone was shot down. Israel later launched further strikes in Syria. […]

In a further response, the IDF “targeted Iranian targets in Syria”, according to the military. The mission deep inside Syrian territory was successfully completed, it said.”

In other words, BBC audiences were not informed that the drone was launched from a Syrian airbase used by Iran’s Quds Force.

Syrian air defence systems attacked the planes carrying out that strike, leading to event number four – the evacuation of the plane that crashed near Harduf in the Galilee region and the sounding of air-raid sirens in communities in the Golan Heights. In other words, the headlines and initial paragraphs used in various versions of this BBC report all relate to the fourth event in the sequence rather than the first.

“An Israeli F-16 fighter jet has crashed after being hit by Syrian air defences during an offensive in Syria, the Israeli military says.

The two pilots parachuted to safety before the crash in northern Israel. It is believed to be the first time Israel has lost a jet in the Syrian conflict.[…]

After coming under Syrian anti-aircraft fire, the F-16’s two crew members ejected and were later taken to hospital. One of them was “severely injured as a result of an emergency evacuation”, the IDF said. […]

Alert sirens sounded in areas of northern Israel and the Israeli-occupied Golan Heights because of Syrian anti-aircraft fire.

Residents reported hearing a number of explosions and heavy aerial activity in the area near Israel’s borders with Jordan and Syria.”

The BBC also chose (not for the first time) to amplify Syrian propaganda:

“Syrian state media quoted a military source as saying that the country’s air defences had opened fire in response to Israeli “aggression” against a military base on Saturday, hitting “more than one plane”.”

The fifth event in the chain was a number of strikes by the IAF on additional Syrian and Iranian military sites in Syria. Syrian anti-aircraft fire again triggered sirens in northern Israel. The BBC reported that event as follows:

All the Israeli aircraft from this sortie returned safely.”

Towards the end of the report – under the subheading “What is the Iranian presence in Syria?” – readers were provided with background information which failed to enhance their understanding of Iran’s use of Syrian territory as a launch pad for attacks against Israel (with Syrian cooperation) in recent years while conflating the role played by Iran and Hizballah in the Syrian civil war with their pre-existing hostility towards Israel.

“Iran is Israel’s arch-enemy, and Iranian troops have been fighting rebel groups since 2011.

Tehran has sent military advisers, volunteer militias and, reportedly, hundreds of fighters from its Quds Force, the overseas arm of the Iranian Revolutionary Guards Corps (IRGC).

It is also believed to have supplied thousands of tonnes of weaponry and munitions to help President Bashar al-Assad’s forces and the pro-Iranian Hezbollah, which is fighting on Syria’s side.

Tehran has faced accusations that it is seeking to establish not just an arc of influence but a logistical land supply line from Iran through to Hezbollah in Lebanon.”

While subsequent analysis from Jonathan Marcus was more lucid, it conformed to the usual BBC policy of failing to clarify that Iran’s transfer of weapons to Hizballah in Lebanon breaches UN Security Council resolution 1701.

As we see the BBC’s reporting on this story focused primarily on the loss of an Israeli jet rather than on what caused that event – also the story’s main issue – the attempt by Iran to infiltrate Israel. Not only did the BBC choose to amplify Iranian and Syrian disinformation on the story but it also implied to audiences that there is room for doubt regarding the veracity of official Israeli accounts.

That approach was also seen in additional BBC reporting – as we shall see in part two of this post.

10 comments on “BBC jumbles cause and effect, amplifies disinformation in Iran drone story – part one”