Between March 30th and April 27th the BBC News website produced reports on all but one of the Friday ‘protests’ staged along the border between Israel and the Gaza Strip by the organisers of the ‘Great Return March’.

The weekly rioting was renewed on Friday May 4th and once again it included attempts to cause fires on Israeli farm land adjacent to the border. The use of incendiary kites for that purpose has been seen since the third week of the publicity stunt organised by Hamas and other terror groups but BBC News website audiences have seen no reporting whatsoever on that topic. In contrast, readers of the New York Times were informed that:

“Gaza’s flaming-kite squadrons had worked for days to prepare for Friday’s protest along the border with Israel, building hundreds of flimsy-framed sails with tails meant to carry crude incendiary devices, like rags soaked in gasoline.

Their battle plan was to fly them in swarms into Israel with the aim of igniting the dry fields of the rural communities on the other side of the border fence. They were counting on help from a heavy heat wave to fan the fires. […]

“The wind is still against us,” Ismail al-Qrinawi, 41, said about 4 p.m. at a protest site near Bureij, about halfway along the 25-mile eastern border of the Gaza Strip. “We are waiting for it to pick up so we can fly tens of kites and burn their crops,” he added, as masked men waited nearby with a couple of kites and gasoline. […]

Nearly 400 acres of wheat ready for harvesting went up in flames, according to Gadi Yarkoni, head of the Eshkol Regional Council, which represents many Israeli communities along the border with Gaza. The damage was worth nearly half a million dollars, for which the farmers will get compensation from the state.”

BBC audiences likewise did not see any dedicated reporting on the subject of an arson attack on the Kerem Shalom crossing which was also carried out during the May 4th rioting. 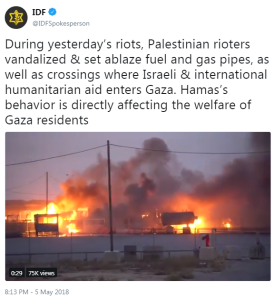 “Yesterday, Friday, May 4, 2018, the riots escalated as Palestinian rioters vandalized and set ablaze the pipes that carry fuel and gas, as well as several of the crossings where humanitarian aid from the State of Israel and the international community passes into the Gaza Strip in order to improve the wellbeing of Gaza residents. The rioters burned offices, buildings, and gas tanks, and damaged fences and gate.”

As noted at the Times of Israel:

“The damage caused Friday will very likely cause delays and difficulties in the transfer of goods into Gaza, not to mention the supply of desperately needed fuel, and exacerbate the already difficult humanitarian situation.”

However, the only mention of that incident on the BBC News website came in the form of twenty-two words in a report on another topic that was published the following day:

Kerem Shalom is the sole crossing point for commercial goods into the Gaza Strip and some 2,370 trucks pass through it weekly carrying supplies that include building materials, food, agricultural produce and medical supplies. In addition, some 607 thousand litres of petrol, 3,200 litres of solar and 1,500 tons of gas are usually piped weekly into the Gaza Strip through that now damaged infrastructure.

While BBC audiences are regularly – and often falsely – led to believe that counter-terrorism measures employed by Israel are the prime factor influencing the humanitarian situation in the Gaza Strip, significantly this latest example of Palestinians sabotaging their own supply routes only got a cursory mention from the BBC.