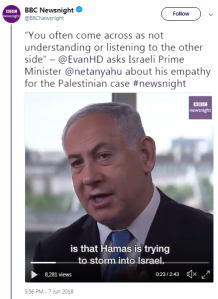 Notwithstanding the fact that he spent a significant proportion of the interview interrupting his interviewee, Davis’ questions related to three topics: the JCPOA deal between the P5+1 and Iran, recent events along the Gaza Strip-Israel border and the ‘peace process’.

On the first topic BBC audiences heard Davis repeatedly opine that “military action” against Iran is inevitable – but ineffective. Notably, when the subject of Iran’s financing of regional terror was raised by Netanyahu, Davis quickly changed the subject. [emphasis in italics in the original, emphasis in bold added]

[3:40] Davis: “Let’s move on and talk about events in Israel, around Israel and in the Middle East. May the 14th was a really interesting day for your country, It was the day the American embassy in Jerusalem opened and a lot of people were watching literally television news programmes split screens of the celebrations you were having and attending over that and at the same time shooting of protesters on the Gaza border. How many died that day?”

Netahyahu: “Sixty-two – fifty of which were Hamas terror fighters according to the Hamas….”

Three more of those killed in the pre-planned rioting were claimed by the Palestinian Islamic Jihad – as the BBC is no doubt aware – but Davis proceeded:

Davis: “A dozen, a dozen civilians.”

Netanyahu: “For the moving of the embassy to Jerusalem – of course it was; it was great.”

Davis [interrupts]: “You didn’t seem to show much concern for the dozen or so civilian deaths.”

When Netanyahu began to speak about the non-lethal means of riot control employed along the Gaza Strip-Israel border, Davis cut him short again:

Davis [interrupts] “You’ve made this point many times and I just wonder…I still wonder whether you would use the phrase it’s a glorious day.”

Netanyahu: “On the moving of the embassy; for sure. Look…”

Davis can of course get away with that latter statement because for three months the BBC has avoided providing its audiences with details of the background to the pre-planned agitprop and its instigators.

Netanyahu: “It was glorious in Jerusalem and it was regrettable in Gaza…”

Viewers then witnessed some classic editorialising from Davis:

Davis next moved on to the topic of the ‘peace process’ – ignoring the fact that Hamas has no intention of making peace with Israel and Fatah (in its own words) “categorically rejects the idea of a Jewish Israel”.

Davis: “Well tell me what is on offer? What is on offer to the Palestinians if they do everything that you say in terms of recognition of the right of Israel to exist as a Jewish state?”

At 7:36 viewers heard the following:

Davis: “So tell me…so just…because I think the really important thing – who is the obstacle to peace. And in terms of how the world sees the division of terrain, your position is your security is paramount, your security cannot be achieved without occupying their land and anyway, by the way, they can’t even have all their land because you’re taking some of it.”

Later on Evans made the following claim:

As Netanyahu subsequently clarified, Davis’ presentation of who rejected the Allen plan is inaccurate. Presuming to speak for the US general, Davis however retorted with the claim that “John Allen would argue that politics got in the way”.

When Netanyahu brought up the issue of Jewish refugees from Arab lands, Davis again cut him short.

[11:46] Davis: “But do you…do you understand why there’s grievance in your region? Do you see it from the other point of view? Because you often come across as not understanding or listening to the other side.”

Prior to ‘Newsnight’ viewers being shown this interview, selected parts of it were used by the BBC World Service radio programme ‘Newshour’ – as we shall see in an upcoming post.

7 comments on “Editorialising, omission and inaccuracies from BBC’s Evan Davis”