Those who read an article titled “Syria war: Air strikes knock out hospitals in Deraa” on the BBC News website on June 27th learned that: 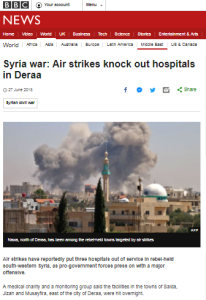 The United Nations said the government’s artillery and air strikes had prompted between 45,000 and 50,000 people to flee their homes in Deraa province and head towards Jordan and the Golan Heights.

It warned that the displaced population was in urgent need of humanitarian assistance, and that southern border communities would soon be overwhelmed because Jordan had said it would not allow in any more refugees.” [emphasis added]

Readers of another article on the same topic that was published on the afternoon of June 28th under the headline “Syria war: Air strike on Deraa shelter kills 17 civilians” were told that:

“UN officials said on Tuesday that between 45,000 and 50,000 people had fled their homes in Deraa province and head towards Jordan or the Golan Heights. They warned southern border communities would soon be overwhelmed because Jordan had said it would not allow in any more refugees.”

On the morning of June 29th it was announced that the Israeli army had delivered tons of humanitarian aid to displaced Syrians during the night.

“The IDF delivered about 60 tons of humanitarian aid to the Syrian Golan Heights on Thursday night after some 120,000 fled the southwestern part of the country in the wake of the Syrian army’s onslaught in the area.

During the special overnight operation, some 300 tents, 13 tons of food, 15 tons of baby food, three pallets of medical equipment and medicine and some 30 tons of clothes and shoes were transferred into Syria from four different spots on the border.

The aid was transferred to Syrian refugee camps in the southern and central parts of the Syrian Golan. The camps, located near the border with Israel, house several thousands of Syrians under poor conditions with no access to water, electricity, food or other basic necessities.”

Despite having reported the UN’s call for humanitarian assistance the BBC News website did not produce a new report or even update its June 28th article to inform audiences of the Israeli delivery of aid to displaced Syrians.

Later versions of an article published on the BBC News website on July 2nd (three days after the aid had been delivered) under the headline “Syria war: 270,000 displaced by fighting in south-west” inform readers that: