Around five hours after the BBC News website had rephrased a problematic headline to a report concerning missile attacks launched from the Gaza Strip which it had published two hours earlier, the article was amended once again. 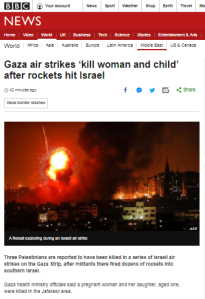 The inaccurate claim that violence had broken out “after militants shot at an IDF vehicle in Gaza on Wednesday” – which by that time had been online for over seven hours – was revised:

“On Wednesday afternoon, the IDF said militants had fired shots at civilians constructing an underground barrier along the border fence, damaging a vehicle. In response, a tank targeted a Hamas post in northern Gaza, it added.”

Some five hours after that, the report was updated again to include further developments.

Providing BBC audiences with a link to the Hamas affiliated Shehab news agency and once again failing to clarify that “Gaza health officials” are actually part of the same terror organisation that had launched some 180 missiles at Israeli civilians in the 24 hours before this update, the amended report informed readers that:

“The calm only lasted a few hours, however, before a long-range Grad rocket landed in an open area on the outskirts of the southern Israeli city of Beersheba – setting off sirens there for the first time since the last Gaza war in 2014.

There was no immediate confirmation from the IDF, but Israeli media said the building was believed to have served as a Hamas headquarters.”

Nearly two hours before the BBC News website made that amendment to its report, the Times of Israel had already reported IDF statements concerning the building’s purpose.

“The Israeli Air Force on Thursday evening flattened a five-story building in the northern Gaza Strip that served as a headquarters for the Hamas terrorist group’s internal security service, the army said.

The Israel Defense Forces said the strike on the building in the northern Gaza Strip, which also served as a cultural center in the coastal enclave, was in response to “rocket fire by the Hamas terror group against the city of Beersheba earlier in the day.” […]

The building targeted by the Israeli strike in Gaza City was known as the Said al-Mishal Cultural Center. The building contained the second-largest theater in the Strip and was home to an office for Egyptians living in coastal enclave.

However, the IDF said the building was also used by Hamas’s internal security service, which “is the operational arm of the political leadership of the Hamas terror group.”

The military said the building contained offices used by the security service.

“Some of the members of the internal security unit are also operatives of Hamas’s military wing,” the IDF said.”

IDF spokespersons also Tweeted information in Hebrew and in English.

However, according to the version of events which the BBC News website is apparently happy to have remain online as “historical records“, the building was a “cultural building” which unspecified second-hand sources claimed was “believed” to also function as “a Hamas headquarters”.

Apparently the BBC thinks that passes for the “accurate and impartial news…of the highest editorial standards” which it is committed to providing to its funding public.