On September 12th a filmed report was posted on the BBC News website under the headline “Gaza’s abandoned airport in ruins” and with the following synopsis:

“In 1998 the Yasser Arafat International Airport was built in Gaza.

It was seen by many as a symbol of Palestinian sovereignty, soon after the Oslo Accords were signed by Israel and the Palestinians, in a move towards peace.

But by 2001, the airport was no longer operational.” 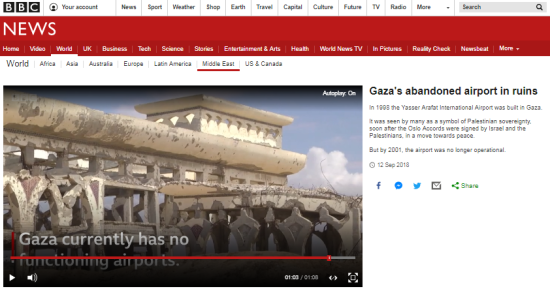 Viewers of the report were told that:

“These are the ruins of Gaza’s international airport. Yasser Arafat International Airport opened in 1998, costing $86m. But no planes have taken off or landed here since 2001. The runway is scattered with litter from nearby refugee camps. But this place was once seen as a symbol of Palestinian sovereignty. The airport was opened soon after the Oslo Accords which were a bid for peace between Israel and the Palestinians. But Israeli-Palestinian relations broke down. The airport was destroyed by Israel during the Second Intifada. The International Civil Aviation Organisation condemned the destruction of the airport and urged Israel to allow it to reopen. Gaza currently has no functioning airports.”

As we see, BBC audiences were given scant background information concerning the circumstances behind the airport’s closure and failure to subsequently reopen. Interestingly, in April 2005 – over two years before the Gaza Strip was taken over by the Hamas terror faction – a BBC reporter had already noted that:

“The Palestinian leadership says it is time to re-open the airport.

But Israel says no. Gaza is home to militant groups like Hamas that have struck at Israeli soldiers and civilians many times. Israel worries that its enemies might use the airport to smuggle in weapons.

The Palestinian security forces are widely regarded as being riddled with members who are sympathetic to – or even active in – militant groups.

The Israelis say they don’t believe that they would run the airport securely.”

Neither were viewers of this report told that the Oslo Accords also included a clause titled “Security of the Airspace” according to which Israel was to maintain control of Gaza’s airspace. Following Israel’s disengagement from the Gaza Strip in the summer of 2005, an Agreement on Movement and Access was signed between Israel and the Palestinian Authority which included the following clause on aviation:

“The parties agree on the importance of the airport. Discussions will continue on the issues of security arrangements, construction, and operation.”

Two months later, in January 2006, the Palestinian Legislative Council elections brought significant gains for Hamas, which went on to take over the Gaza Strip in a violent coup in June 2007, with the result that the co-signer of that agreement – the Palestinian Authority – lost all influence there.

So while BBC audiences were correctly told that Israel had been “urged to allow it to reopen“, they were not informed why Israel might consider an international airport situated literally meters from its border and controlled by a terrorist organisation which does not co-operate with Israel on anything – let alone aviation safety and security – and which has been responsible for hundreds of terror attacks and the firing of thousands of missiles against Israeli civilians, to be a security concern.

On the same day that the BBC’s report emerged, AFP’s Gaza office produced a filmed report from the exact same location and with some strikingly similar visuals. 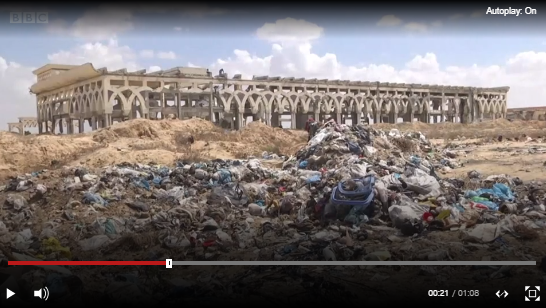 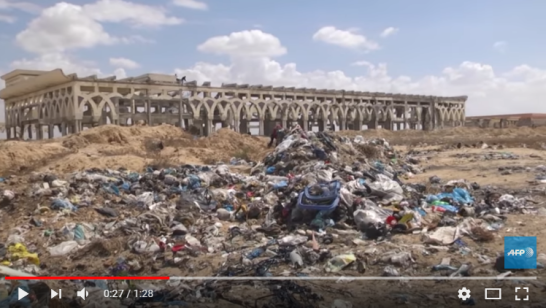 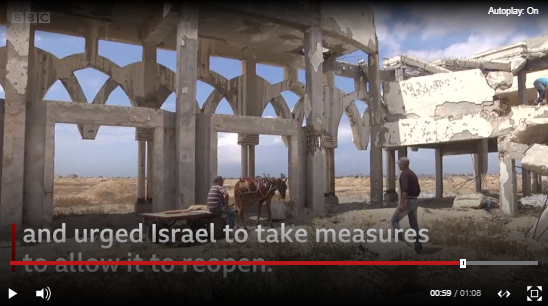 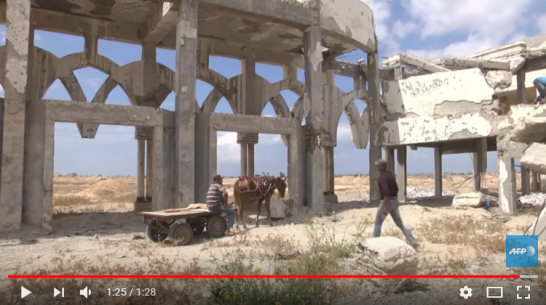 However, unlike the BBC version, AFP’s report also included contributions by officials from the Palestinian Aviation Authority and the Gaza Civil Aviation Authority who, it appears from a written AFP report published on the same day, accompanied the agency’s journalists to the location.

“Zuhair Zomlot, coordinator of the Civil Aviation Authority in Gaza, joined AFP on the tour.”

The reopening of the Gaza Strip airport has of course long been on the wish-list presented by Hamas during negotiation of assorted ceasefire agreements. Now an AFP Gaza bureau report produced in cooperation with Gaza based officials has apparently been recycled into a context-free ‘stocking filler’ BBC video which does nothing to provide audiences with the information needed for full understanding of how the fact that “Gaza currently has no functioning airports” is connected to Hamas terrorism.

3 comments on “Behind a BBC News video on Gaza airport”