In July the BBC’s Executive Complaints Unit (ECU) informed BBC Watch that it had upheld one of the three points made in a complaint concerning a BBC Two Christmas 2017 programme titled ‘Alternativity‘.

As noted at the time:

“According to further communication with the ECU, that finding “will be published in due course on the complaints pages of bbc.co.uk“. BBC Watch does not know what the BBC considers to be “due course” after it has taken over six months for a point rejected at stages 1a and 1b to be upheld by the ECU.”

Two months later – and over nine months after the complaint was originally submitted – that finding now appears on the BBC News website. 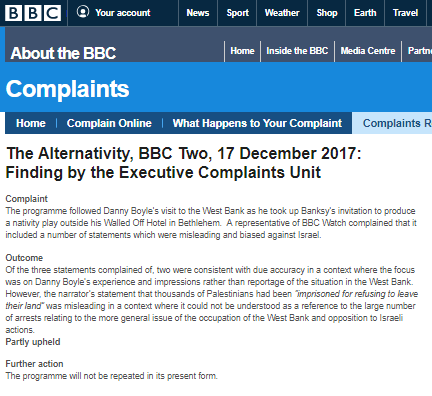