The Israel Security Agency’s report on terror attacks (Hebrew) during August 2018 shows that throughout the month a total of 206 incidents took place: 64 in Judea & Samaria, 12 in Jerusalem, one inside the ‘green line’ and 129 in the Gaza Strip sector.

In Judea & Samaria and Jerusalem the agency recorded 66 attacks with petrol bombs (eleven of which were in Jerusalem), six attacks using improvised explosive devices (IEDs), three arson attacks and one stabbing attack.

Five people – four civilians and one member of the security forces – were wounded in attacks that took place during August. A soldier was wounded in a petrol bomb attack on August 6th. Two civilians were wounded in rocket attacks on August 8th and two more – one a foreign national – the following day.

Those reports mention the rocket and mortar attacks that took place on August 8th and 9th – and the resulting injuries – as well as two shooting incidents in the Gaza Strip sector. None of the additional incidents received any BBC news website coverage.

At best, therefore, it can be said that BBC News website audiences saw coverage of 41% of the terror attacks (mostly missile fire) which took place during August.

Since the beginning of 2018 the BBC has reported 22% of the terror attacks that have taken place and 87.5% of the resulting fatalities. 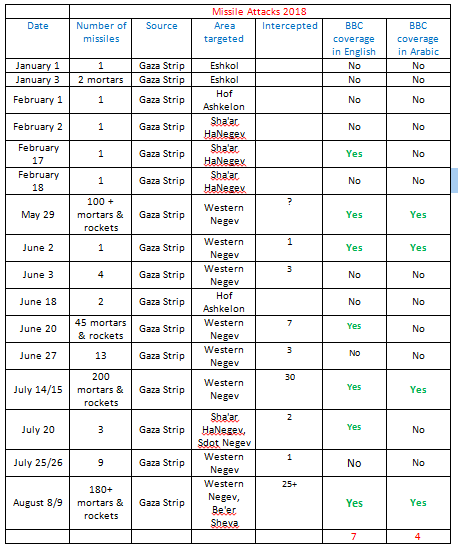