One of the stories the BBC chose to cover widely last year was that of cuts in direct and indirect financial assistance to Palestinians by the US administration.

However BBC audiences have to date not seen any reporting on a recent story that also concerns US aid.

“The Palestinian Authority has informed US Secretary of State Mike Pompeo that it will no longer accept any American security aid dollars as of the beginning of February, in a development seen as a blow to Israeli-Palestinian security ties.

PA Prime Minister Rami Hamdallah sent a letter to Pompeo on December 26, 2018, telling him that the PA would reject US financial support because of a new American law known as the Anti-Terrorism Cooperation Act.

Under the law, American courts will have the jurisdiction to rule on cases against any foreign party accused of supporting terrorism that accepts US aid. In practice, that means American victims of Palestinian terrorist attacks would be able to file lawsuits against the PA and PLO in US courts for compensation — possibly in the hundreds of millions — if the Ramallah-based body accepts even one penny of American aid.

“The Government of Palestine respectfully informs the United States Government that, as of January 31st, 2019, it fully disclaims and no longer wishes to accept any form of assistance referenced in ATCA…the Government of Palestine unambiguously makes the choice not to accept such assistance,” Hamdallah wrote in the letter, adding that the PA would reconsider its decision if ATCA were changed in a way that would protect it from lawsuits in American courts. […]

In the past year, the Trump administration has sent $61 million to the PA in security aid, a State Department official said in an email.”

As can be seen in an interestingly worded Tweet, the BBC’s US State Department correspondent has been aware of that story for several days. 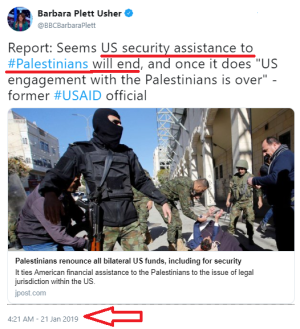 Nevertheless, BBC audiences will find no mention of the PA’s refusal to accept US aid on either the United States or Palestinian Territories pages of the BBC News website.

A year ago, in January 2018, BBC World Service radio audiences were told that any cut in US aid to Palestinians would cause the Palestinian Authority to collapse with detrimental results for Israel, European and American interests and the Middle East peace process. They were twice told that the US president is ‘blackmailing’ the Palestinians.

Apparently the BBC does not see the Palestinian Authority’s refusal to accept millions of dollars of US assistance unless an American law is changed in a similar light.