On February 27th and 28th the BBC show ‘Global Questions’ recorded two programmes – the first in English and the second in Arabic – at the YMCA Centre located on King David street in the western part of Jerusalem.

On March 1st Zorgui tweeted from his official BBC account that he was “in Palestine this time”, adding a link to his Facebook page where at least 3 photos – one of them taken inside the YMCA building – are captioned “in Palestine”.

Zorgui made similar remarks at the February 28th event itself, referring to the city and country he was in as “Jerusalem” and “Palestine” prior to the commencement of recording. 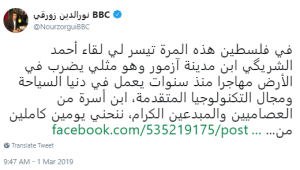 CAMERA Arabic submitted a complaint to BBC, expecting that the network would acknowledge this breach of its own editorial guidelines and act to have Zorgui remove or amend his social media posts. However, since we were informed on March 15th that our complaint “had been referred to the relevant people” and that they “regret that it may take a little longer before they can reply”, at of the time of writing no further response has been received.