Back in March we noted that the BBC’s online profile of the Golan Heights informed readers that:

“The area [Golan Heights] is also a key source of water for an arid region. Rainwater from the Golan’s catchment feeds into the Jordan River. The area provides a third of Israel’s water supply.” [emphasis added] 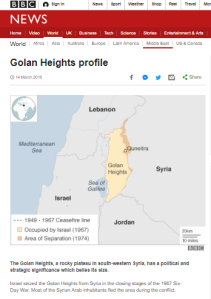 As noted here at the time, that highlighted claim is inaccurate.

“A document produced by the Knesset Research and Information Center last year shows that three main natural sources – one of which is the Kinneret (Sea of Galilee) basin – currently together provide just 40% of Israel’s water. […]

With the Sea of Galilee being only one of the three main natural sources which together currently provide just 40% of Israel’s water supply and the Golan Heights being only one of several severely reduced sources of water to the lake, the BBC’s claim that a third of Israel’s water supply comes from the Golan Heights is clearly inaccurate and misleading.”

BBC Watch submitted a complaint on that topic (including a link to the relevant document) on March 26th. On April 3rd we received notification that BBC Complaints “had referred your complaint to the relevant people and regret that it may take a little longer before we can reply”. On April 22nd we were informed that BBC Complaints had “not been able to reply to your complaint within the time period we aim for”.

Nearly three months after the complaint was originally submitted – on June 14th – we received another communication – this time from the BBC News website.

“Thank you for getting in touch about our Golan Heights profile (https://www.bbc.co.uk/news/world-middle-east-14724842) and I’m sorry for the long delay in writing back to you.

You raise a fair point and we’ve since removed the reference to the area supplying a “third of Israel’s water supply”.”

“The area is also a key source of water for an arid region. Rainwater from the Golan’s catchment feeds into the Jordan River.”

No explanation was provided as to why it took nearly three months for the inaccurate claim to be removed and no footnote was added to the profile to inform BBC audiences that they were previously misinformed.

The continued absence of a corrections page on the BBC News website of course means that readers who previously read that profile remain unaware that they were given inaccurate information.